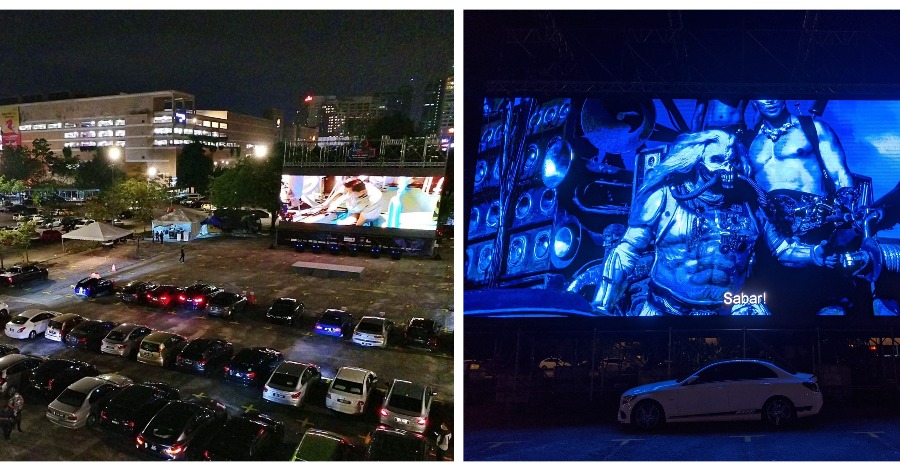 There are a lot of companies and also business owners that have been taking some creative methods on how to make sure their business keep on surviving during this Covid-19 Pandemic situation. For example, this is one of the well known supermarkets located in Petaling Jaya known as 1 Utama Shopping Centre have came out with a creative and interesting drive-in cinema that now provides a brand new 3-storey tall screen. This new feature can make sure even the cars that are parked at the back could even see the screen and enjoy the movie peacefully without interruptions.

The open roof cinema is called the CineDrive which only located a stone’s throw away from the 1 Utama Shopping Centre at Dataran Outdoor Carpark. On the 17th of September 2020, 1 Utama Shopping Centre’s Facebook page has announced about the new feature and that the screen would be about 42ft tall and also 52ft wide. They have obviously done their homework because as they have stated on their website, the screen of the cinema has been lifted 1-storey off the ground to ensure that there will be no obstructions even for the viewers at the back row.

It will be the most interesting thing to do because there will be 22 blockbuster movies to watch. For an example of the movies would be Detective Pikachu, Crazy Rich Asians, Joker, Aquaman, and also The Greatest Showman. There will be more exciting movies to choose from between the 19th and also the 27th of September. An important note to be done by all the viewers during the movie would be to tune their FM radio frequency in their car to a specific channel so that they could receive the audio for the movie and then they could just enjoy their movies in the comfort of their cars.

The organizers for this CineDrive has thought everything through because they even purchased the carbon credits from solar projects so that they can offset the emissions when the viewers decided to turn on their engine while they are watching the movies.

The price of the ticket would be RM80 including with large popcorn and also two drinks for the viewers. They can also add more snacks by paying extra RM15. The CineDrive also provides VIP tickets for the viewers where ‘seats’ would be assigned and are not based on a first-come, first-served basis. For ONECard owners which is the mall’s loyalty card would be able to get 15% off the total ticket price.