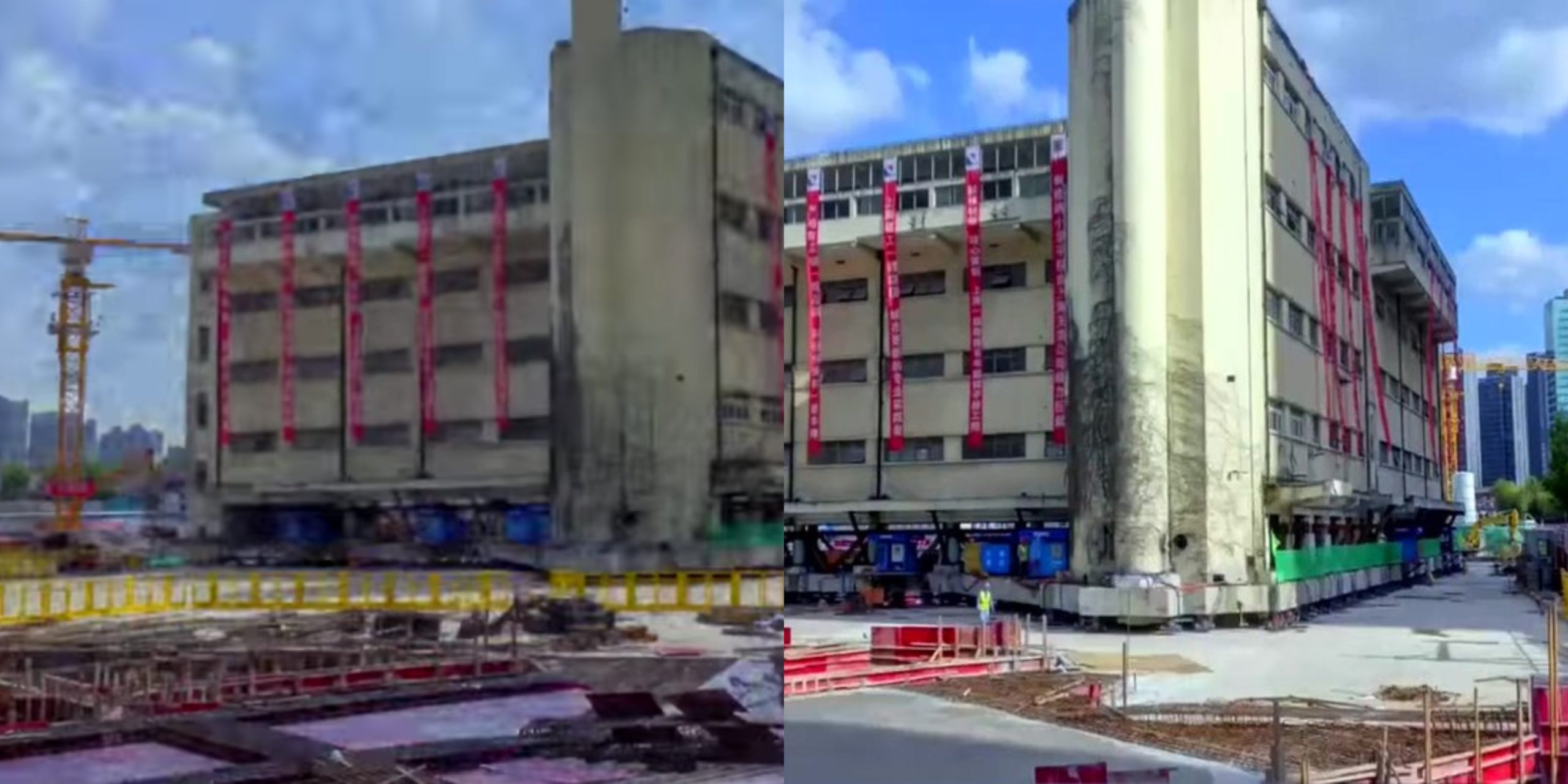 China has its own version of moving houses that have been a tradition for a long time. Different than other traditions that come from other places, they did not change the house instead they moved the tall building to a new location.

Around last week, a team of engineers in Shanghai relocated an 85-year-old local primary school building. The building, which was built in the year 1935 and weighed 7,000 tonnes, was relocated to a new location so that the old location can be used to make way for the construction of a new commercial center in the area.

Typically, a team of engineers will use a giant slide or better known as ‘flatbed’. Even so, due to the different shape of the school building, they had to use a new method by making the building ‘walk’ using 200 equipment like a robot ‘foot’ installed under it. The building was then moved step by step and is said to take 18 days to get to the new location.

The school building is not the only building that engineers successfully relocated to a new location. Among other buildings that have been relocated to make way for other construction projects is a five-story office in Shandong.

In fact, the workers there are said to have continued their work as usual in the 8,000-ton building during the evacuation procedure.

New Investigation By Aviation Experts Claims To Have Located Where MH370

This woman from Stockholm is being suspected of illegal detention of a 41-year-old man, his son, who is in dire condition when he was found. Currently, the man is being hospitalized.

From the apartment block in Haninge, south of Stockholm, the police and local media said that the woman is being arrested for keeping her son confined in their flat for almost three decades.

A public prosecutor in charge, Emma Olsson, said the 70-year-old woman who denies any wrongdoing was being held against suspicion of illegal detention and abuse of her own son.

The son is hospitalized to treat his physical injuries that were present when he was found, but it wasn’t specified where he got them from.

According to the local newspaper, the son was found by a relative who got curious and opened the door to their unlocked flat as the mother of the son was hospitalized at the moment.

The relative mentioned to the authorities 20 years ago that she had suspected the woman of being in total control of her son, but no official action had been taken and other family members had urged her not to cause trouble.

“But I understood he was in there and he must be afraid,” she told the newspaper.

“I pushed the door and shouted hello. It stank of urine, dirt, and dust. It smelled rotten. No one can have cleaned for many years,” she added.

She pushed her way through piles of rubbish to the kitchen, where she found the man sitting in a corner. She noticed that his legs look horrible – they were filled with bruises and sores.

The man could barely stand, missing much of his teeth, and had a slurred speech.

“He spoke very fast and a little incoherently but he was not afraid of me,” she continued. “I’m in shock, but I’m thankful he got help and will survive.”

Apparently, the woman detained has lost a child before at a young age, and once she got another son, she named it the same as her previous one and became very over-protecting of him. Aftonbladet newspaper mentioned that the son has been taken out of school when he was around 12 or 13.

“She stole his life from him and manipulated the people around her in order to keep her secret … he has been badly let down by all of society,” the unnamed relative told Aftonbladet.

An unidentified neighbor who lived in the same building told the paper they had not seen the man for years.

“They almost never went outside, and never even opened the windows for fresh air,” she said.

“The apartment was sealed,” added the neighbor.

Many neighbors found the situation strange, she said. “But what can you do? How do you know what’s going on behind closed doors?” KUALA LUMPUR, Dec 4 — The Southbound Elmina Rest and Recuperation area along the Guthrie Corridor Expressway (GCE) will be closed for four months beginning today to give way to upgrading works.

PROLINTAS Expressway Sdn Bhd (PESB) in a statement today said the initiative was in line with PROLINTAS’ continued commitment to providing the best service to highway users, and the R&R was expected to be opened again by mid-April next year.

“Following the closure, existing facilities such as food stalls, surau and toilets will not be in operation. A such, GCE users are advised to use the facilities at the Bukit Jelutong Rest Area,” the statement read.

GCE users can contact the customer service hotline at 1-300-88-0035 for further information and get traffic updates at @GCEtrafik, www.prolintas.com.my and the PROLINTAS Highways official Facebook page.