Earlier in November, two vaccines were announced to be 90% effective against the global coronavirus widespread; the Moderna and the Pfizer/BioNTech COVID-19 vaccines, though some complications might occur to it having a few factors that must be taken with care.

Not long after, the University of Oxford in collaboration with AstraZeneca had also developed a vaccine that could be easily accessible throughout the entire globe.

The interim analysis showed a 70% efficacy average during the late stage-trials in the United Kingdom and Brazil, but news came on Nov. 23 that the efficacy rate depended on the dosage.

Patients that received half a dosage, then a full dosage after at least one month, showed to be 90% effective.

During another test, the patients were given two full doses, which the effectiveness rate was only 62%.

Sarah Gilbert, project leader from the University of Oxford, explained the factors as to why that occurred in an interview;

“We will be digging into the details of exactly why we get a better efficacy with the half-dose, full dose than what so far we’ve seen with the two full doses.

It may be because that better mimics what happens in a real infection, so what we should always try to do with a vaccine is fool the immune system into thinking that there’s a dangerous infection there that it needs to respond to – but doing it in a very safe way.

If the pathogen itself is then encountered and it could be that by giving a small amount of the vaccine to start with, following up with a big amount, that’s a better way of kicking the immune system into acting and giving the strongest and effective immune response.

But, more work to do on that.”

The Moderna and Pfizer/BioNTech vaccines are both needed to be kept in below-freezing temperature storage, and it might not be as simple to distribute the vaccines to the other parts of the world that won’t probably have the right facilities for it.

While the Univ. Of Oxford/AstraZeneca vaccine could be kept in normal refrigerated temperature.

The University of Oxord and AstraZeneca had pledged that they would not make a profit from this discovery, as they wish for it to be for everyone of all groups, especially those coming from low-income countries.

The vaccines will cost roughly around $3-$5.

The vaccine will also seek emergency use listing from the World Health Organization (WHO) so that it would be quickly distributed to everyone in need.

Queen: Families Should Stick Together to Break COVID-19 Chain 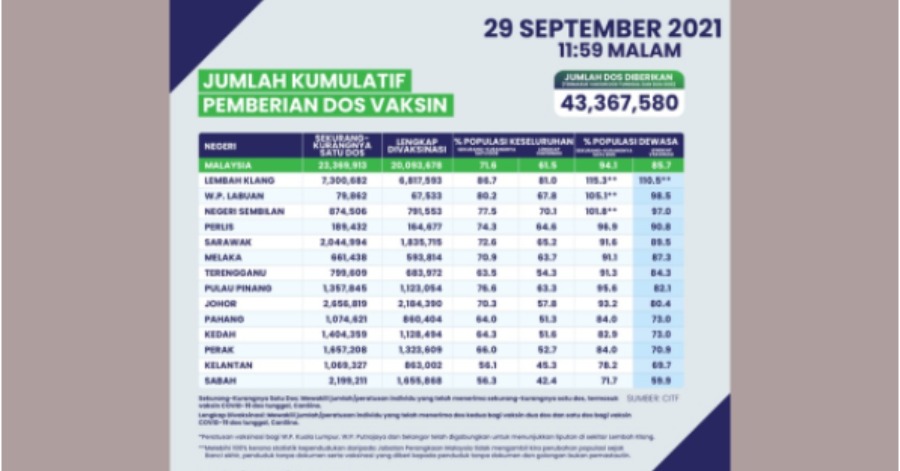 KUALA LUMPUR,  Sept 30  –A total of 20,053,472 individuals or 85.7 per cent of the adult population in the country have completed their COVID-19 vaccination as of yesterday.

Based on the Health Ministry’s data on COVIDNOW, 22,017,043 individuals or 94.1 per cent  of the adults in the country have received at least one dose of the vaccine until yesterday.

It also showed 40,206 individuals or 1.3 per cent of the adolescents, comprising those age between 12 and 17, having completed the vaccination as of yesterday.

PICK was launched on Feb 24 this year to curb the spread of the COVID-19 pandemic.

On the total death reported yesterday, only 88  cases were the actual deaths reported for the day, while the rest were backlog cases.

(Video) Do It Right! Here’s How To Use Nasal Spray Correctly! 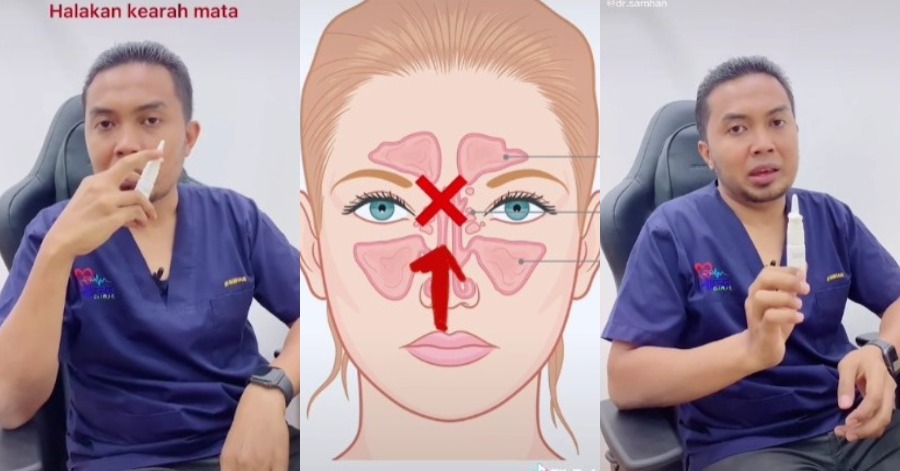 Nasal sprays are liquid medications that are sprayed into the nostrils. They’re used to help reduce nasal congestion (stuffiness). Congestion is a common symptom of allergies or a cold.

While nasal congestion can be treated with an over-the-counter nasal spray, it is not as simple to use as it may appear. Most people thinking that the right way to use the nasal spray is to spray it directly up the middle point of the nose. That will only irritate the

So here’s how to correctly use the nasal spray

2. Test the spray. Press a few times to see if the spray works properly.

4. Your aim is to spray at the Maxillary Sinus or the part which is beside your nose. To do that, tilt the spray towards your eye and then spray. Spraying in an upright position will cause the medication to flow to your throat.

COVID-19 Vaccination: Inmates Behind Bars Grateful They Are Not Forgotten 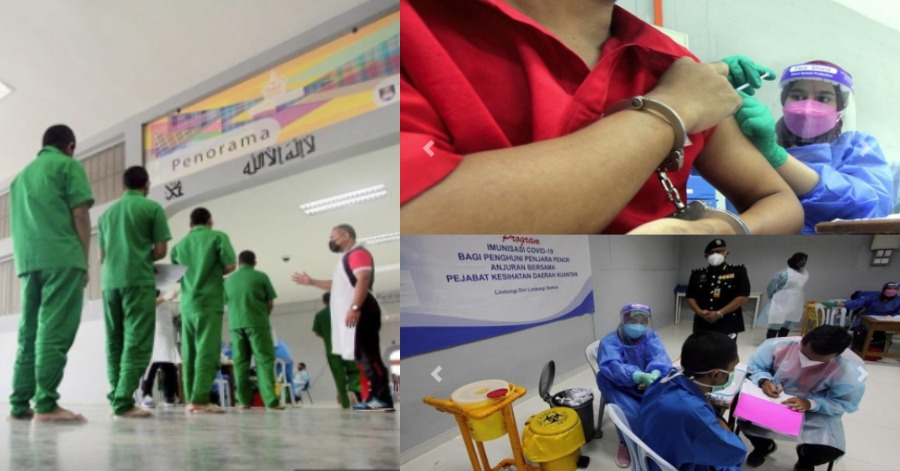 KUANTAN, Sept 29 — Although behind bars, inmates at the Penor Prison here are grateful that they were not forgotten when the government launched the National COVID-19 Immunisation (PICK) programme.

One of them, identified as Tan, 30, said he already knew about the COVID-19 pandemic when he was brought to the prison last February and had wondered if he would also receive the vaccine when PICK was introduced being a prison inmate.

“During a telephone conversation with my parents, they asked me about the vaccination in prison. The next time I get to talk to them, I’ll tell them that I’m already vaccinated…I’m sure they will be relieved,” he told Bernama.

Tan, from Kuala Lumpur, is serving a two-year prison sentence for violating a police surveillance order, was met by Bernama after receiving his second dose of the Sinovac vaccine at the prison today.

As for  Aizi, 29, from Felda Jengka, Maran, who is serving a five-year prison sentence since 2019 for a  drug offence, said he took up the vaccination in prison  because he was worried there would be no more free COVID-19 vaccination by the time he got his release.

“Although we are in prison, we are told on the importance and benefits of taking the vaccine. I know it is important for our own protection and have been waiting to be given the vaccine,” he said.

For Nanthan, 32, who is serving a six-year prison sentence for robbery since middle of last year, his concern was not being registered as a vaccine recipient on the MySejahtera app like other members of his family.

Penor Prison director Fayrouz Ahmad Zawawi said the prison had achieved the herd immunity with  more than 90 per cent of the 1,823 inmates, including foreigners, having been vaccinated.

The vaccination was conducted by 25 health workers under the supervision and assistance of prison staff at a workshop that was turned into a Penor Prison vaccination centre (PPV).

“Those who were vaccinated were also given the COVID-19 vaccination cards, but are kept by the prison and handed over to them upon their release,” he said, adding that those who completed serving their time before getting the second dose could get the second dose outside the prison.

Fayrouz said the vaccination programme at the prison, as well as other measures made by the prison authorities, helped to reduce the spread of the epidemic.

He said new inmates sent to the prison are required to stay at a transit centre for 14 days for observation purposes.

After they are confirmed negative, the inmates are again quarantined for six days in jail before being transferred to their respective residential blocks, he said, adding that since last Aug 1, the cumulative number of those in the prison who were confirmed positive was 269 people.

He said inmates confirmed positive with COVID-19 were sent to the COVID-19 Quarantine and Treatment Centre (PKRC) in Bentong Prison.

“We also took the initiative to measure the oxygen level of inmates using the Pulse Oximeter three times a day and those with low readings, will be rushed to hospital,” he said.

Apart from that, he said the prison staff would also conduct sanitation process in all cells on a daily basis to ensure safety of the inmates.