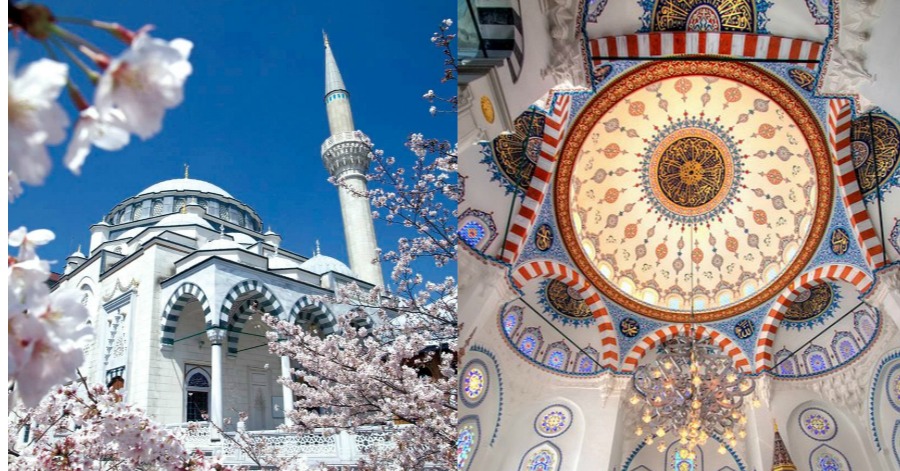 For those who do not know, the Muslim community in Japan is a minority community group. So, it is quite difficult for them and especially outside visitors to find a comfortable place to perform ‘solat’. But now, the construction of mosques in Japan is now more widespread and increasing.

There are several mosques in Japan that have unique architecture and beautiful design. Even the interior design on display is like the construction of a mosque in an Arab country.

Tokyo Camii is the largest mosque in Japan. The location of this mosque is located in the Oyama-Cho area, Shibuya. The mosque was built around 1938, but it was rebuilt in 1998. It features a 4-story mosque which uses a mosque-style architecture in Turkey that is Ottoman style. Apart from performing prayers, the community in Shibuya also makes this mosque an Islamic education center for children in Japan.

Tokyo Camii, Japan’s largest mosque, is architecturally similar to Istanbul’s famous Blue Mosque. For concrete materials, steel and furniture used in the Tokyo Camii mosque were brought from Turkey. About a hundred Turkish designers worked for a year to build the second-floor mosque itself and the cultural center downstairs making it the greatest work of art in Japan.

Kobe Muslim Mosque was the first mosque built in Japan in 1935. It is located on Nakayamate Dori in Chuo-ku, about a 10-minute walk from Motomachi station in Kobe. The mosque was built through donations from the Muslim neighborhood community in Kobe consisting of Indians, Tatars, and Turks. For the exterior of the mosque, it features old traditional architecture (minar).

Meanwhile, the architecture in the building, it brings white marble walls and gold paintings. It is a three-story building built with a very distinctive architectural style, consisting of bases, shafts, and galleries.

During World War II, Kobe province was said to have been destroyed during the war. But what is interesting is, the mosque is still standing upright while every building around the mosque has collapsed and completely destroyed. When the war ended, residents found only a few cracks on the outer walls of the mosque and glass windows.

The Hiroo Mosque in Tokyo is managed by the Arab Islamic Institute. The location of this mosque is quite central and easily connected to the main area of Tokyo. It is within walking distance of Hiroo train station.

Initially, it was a management initiative to promote Arabic culture, tradition, and education in Japan. This educational institution was the first for Arab Islamic culture in Japan. The mosque has a separate prayer room for women and those involved with the Quran and Arabic recitation classes.

Interestingly here, most of the mosque structures in Japan are built just like residential buildings in the neighborhood. Most of these mosques are also located close to other facilities so that the locals can use them more easily and comfortably.

Woman With Biggest Mouth Turns Into A Tiktok Sensation