The United Kingdom National Health Service (NHS) launches its biggest vaccine campaign ever, and this grandmother felt “privileged” to have been the first patient to receive the COVID-19 vaccine.

Margaret Keenan from Coventry received the vaccine jab that has been clinically approved to be used.

This 90-year-old plans to have a small family gathering for Christmas, having been isolating herself for the rest of the year like everybody else.

As the procedure goes, Margaret will be receiving another shot after 21 days to ensure the chances of her being protected by the virus stay high.

“I feel so privileged to be the first person vaccinated against Covid-19, it’s the best early birthday present I could wish for because it means I can finally look forward to spending time with my family and friends in the New Year after being on my own for most of the year,” Mrs. Keenan said, known to family and friends as Maggie, received the jab at 6.31 am from nurse May Parsons at her local hospital in Coventry.

Mrs. Keenas moved to the U.K from Enniskillen, Northern Ireland, and has lived there since.

This woman, who was given the jab by nurse May Parsons at her local hospital, added: “I can’t thank May and the NHS staff enough who have looked after me tremendously, and my advice to anyone offered the vaccine is to take it – if I can have it at 90 then you can have it too.”

It comes as Boris Johnson today branded the coronavirus vaccine a “shot in the arm for the entire nation” and told people who are scared, “don’t be”.

Mr. Boris Johnson, the Prime Minister of the United Kingdom, also slammed anti-vaxxers as “totally wrong” and insisted the Pfizer jab – which the UK is the first country in the world to approve for mass rollout – is safe.

“I would say to all those who are scared, don’t be. There’s nothing to be nervous about.

“It will gradually make a huge, huge difference, but I stress ‘gradually’ because we are not there yet, we have not defeated this virus yet. We can’t afford to relax now.”

Jabs will be administered at dozens of hospital hubs across the country from today – dubbed “V-Day” by Health Secretary Matt Hancock. Mr. Hancock said the start of the roll-out of Pfizer’s Covid-19 vaccine meant there was “finally” a “way through” the coronavirus crisis.

“And just watching Margaret there – it seems so simple having a jab in your arm, but that will protect Margaret and it will protect the people around her.

First Minister of Scotland Nicola Sturgeon said she “got a lump in her throat” watching a video of the first Covid-19 vaccination being administered.

She tweeted: “Feels like such a milestone moment after a tough year for everyone. The first vaccines in Scotland will be administered today too.”

“Less than a year after the first case of this new disease was diagnosed, the NHS has now delivered the first clinically approved Covid-19 vaccination – that is a remarkable achievement,” Sir Simon said.

“A heartfelt thank you goes to everyone who has made this a reality – the scientists and doctors who worked tirelessly, and the volunteers who selflessly took part in the trials.”They have achieved in months what normally takes years.

“My colleagues across the health service are rightly proud of this historic moment as we lead in deploying the PfizerBioNTech vaccine.

“I also want to thank Margaret, our first patient to receive the vaccine on the NHS.

“Today is just the first step in the largest vaccination program this country has ever seen.”It will take some months to complete the work as more vaccine supplies become available and until then we must not drop our guard.

“But if we all stay vigilant in the weeks and months ahead, we will be able to look back at this as a decisive turning point in the battle against the virus.”

The nurse from the campaign, May Parsons had also said that it was a “huge honor” to be the first in the country delivering the jab to a patient.

Speaking at University Hospitals Coventry and Warwickshire NHS Trust, she said: “It’s a huge honor to be the first person in the country to deliver a Covid-19 jab to a patient, I’m just glad that I’m able to play a part in this historic day.

“The last few months have been tough for all of us working in the NHS, but now it feels like there is light at the end of the tunnel.”

This campaign will see patients aged 80 and above as their first stage of the vaccination program because they are at a higher risk of contracting it due to their weakening immune system.

The staff from care homes will also be booked to receive the vaccine.

During the next stages, care home residents and healthcare workers will also be next in the list – these groups will be prioritized to ensure their safety from being in a dangerous and exposed situation.

The vaccine would have complications to be delivered to patients, as it must be stored at -70C before being thawed out and can only be moved four times within that cold chain ahead of use.

More patients from other groups will soon receive the vaccine after the early stages are complete.

Floods: 39 Evacuees In Terengganu And Kelantan Still At Relief Centres 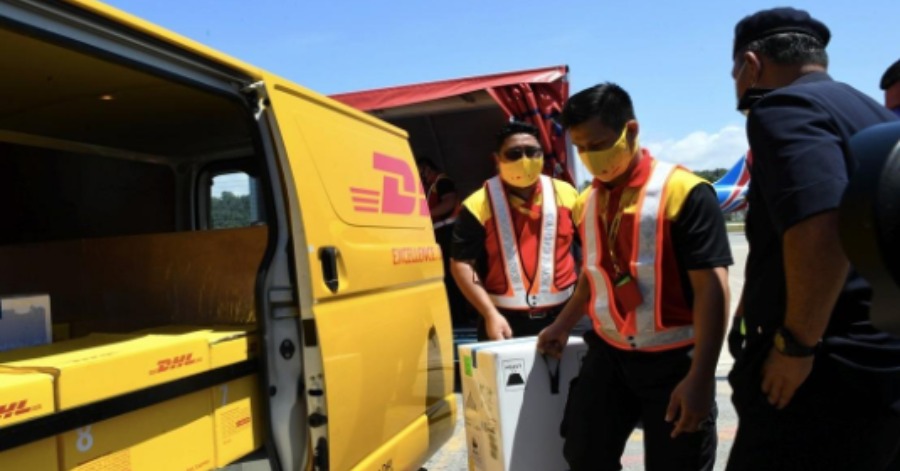 KUALA LUMPUR, Feb 25 — More states in Peninsular Malaysia are receiving the supply of COVID-19 vaccine, Comirnaty, produced by Pfizer-BioNTech on the second day of the first phase of the National COVID-19 Immunisation Programme.

In KEDAH, a DHL lorry carrying 2,340 doses of Pfizer-BioNTech vaccine arrived safely at about 12.40 pm today at the Integrated Pharmacy Logistics Unit store of the Langkawi Health Office at the Air Hangat Clinic.

The lorry had travelled from Penang International Airport to Kuala Perlis Jetty in Perlis before using the RORO ferry service to Tanjung Lembung, Langkawi. 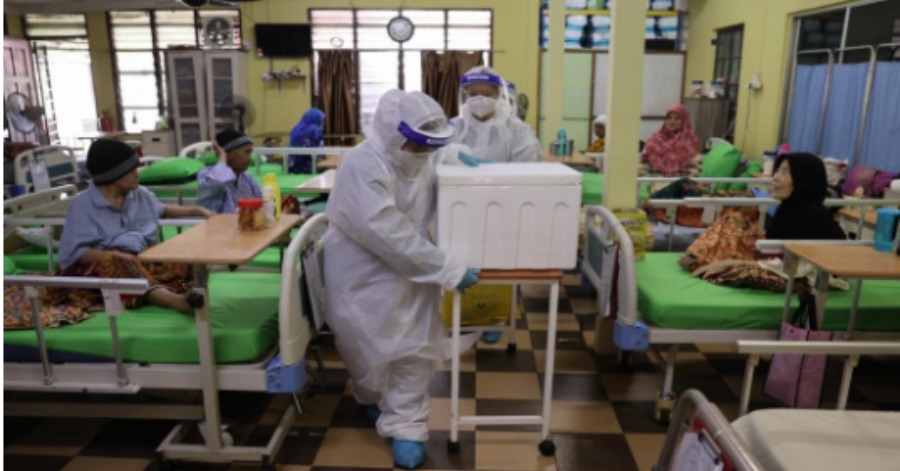 KUALA LUMPUR, Feb 25– The Association for Residential Aged Care Operators of Malaysia (AGECOPE) expressed hope that the COVID-19 Vaccine Supply Access Guarantee Special Committee (JKJAV) to give both licensed and unlicensed care homes more time for to pre-register for the vaccination plan.

Its president Delren Terrence Douglas said longer time is needed to provide an on-site vaccination plan, and to allocate at least 30,000 doses for aged care home staff and residents under the National COVID-19 Immunisation Programme.

He pointed out as operators of aged care centres, old folks’ homes and nursing homes, the association was of the view that the vaccination is among the important tools in battling the COVID-19 pandemic, apart from regular testing as well as effective infection prevention and control measures.

“AgeCOpe is looking forward to work with the Ministry of Health, the Social Welfare Department, the Ministry of Science, Technology and Innovation, as well as all related federal, state government agencies, departments and task forces to ensure our premises are safe and in compliance with the industry’s standard operating procedures (SOPs),” he said in a statement today.

In the meantime, Delren also welcomed the government’s plan to initiate a compensation scheme for those who may experience adverse side effects from the COVID-19 vaccination.

The National COVID-19 Immunisation Programme is implemented in three phases starting Feb 24, with Phase 1 from Feb to April 2021 for the frontliners involving 500,000 people.

The Phase 2, from April to August, will involve senior citizens aged 65 and above, the high-risk groups and the disabled involving some 9.4 million people, while Phase 3 from May this year to February 2022 will cover both Malaysians and non-citizens, aged 18 and above, targetting more than 13.7 million people. Visiting someone who just gave birth to a baby would be such a normal tradition for many people in this whole wide world. Their intention might be to know how the mother’s condition is doing and also wanted to meet the adorable newborn.

Little that people know, there are certain important things that people should avoid doing when they are visiting houses that have babies.

The reason for avoiding these things would be to make sure that the newborn does not get any infections from other people that come to visit the family. A Twitter user named Ahmad Luqman Bukhari who is a Medical Doctor shared this important information on his Twitter page.

Five important things not to do when visiting a house that has a baby:

1) Do Not Touch The Baby Whenever You Feel Like To

Sometimes, people love to touch other people’s babies whenever they wanted and some of them even love to kiss the baby’s cheek because it is so adorable to them. This action is actually very bad to be done because newborn babies got a very low immune system to protect themselves. The life of the baby could be threatened if they got infected with the germs and also bacteria that exist on the surface of the people who touch the baby.

Some people love to intentionally wake a baby up even when the baby is still peacefully sleeping for many unnecessary reasons. It actually makes it bad to wake the baby up especially if the baby just started to sleep because it will disturb the baby’s amount of rest needed per day.

The thing that a young mother who is in confinement really needs is moral and also mental support from the people around her. If she asks, share the knowledge. But if not, do not have to teach the mother everything. Just say words of encouragement that make the mother feel comfortable.

4) Do Not Visit For A Very Long Time

Avoid spending a very long time at other people’s homes especially if they just gave birth. The mother who was in confinement, her body was still tired. She still needs a lot of rest and also sleeps. She might be having postpartum depression if she stressed out too much.

Toxic things like nicotine and other chemicals from the smoke of the cigarette could make the baby’s breath becomes short if the baby inhaled it. It could also cause inflammation in the baby’s delicate airways.