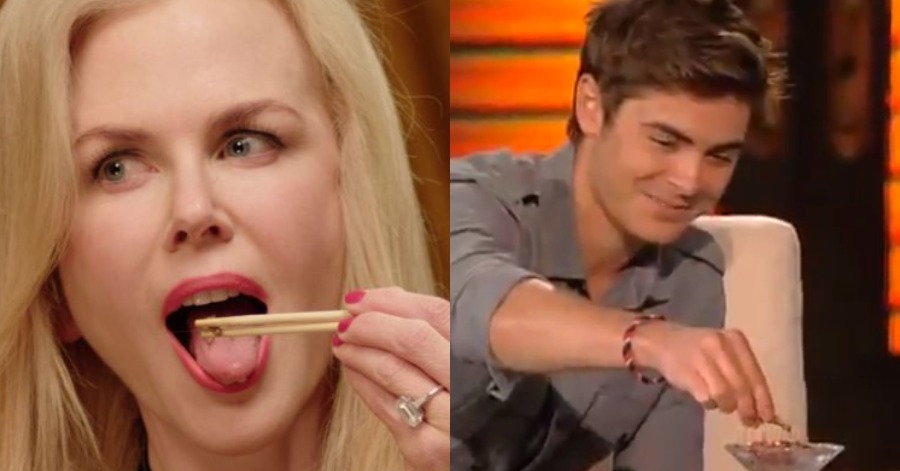 Insects can be said to be among the alternative or daily foods for a particular country, ethnicity, and nation. According to the South China Morning Post, more than 2 billion people across Asia, Africa, South America, and Central America say insects are the best source of protein.

Undoubtedly, there are people who eat insects as one of the alternatives to get a genuine source of protein. However, what about famous celebrities? Do any of them also eat insects?

1. Angelina Jolie And Her Kids

Insects are a part of their regular household diets, Angelina and her kids love to eat insects as their diet routine. She told BBC while filming a documentary in Cambodia that her children love to eat crickets and then followed by tarantulas.

Angelina also said that her sons, Maddox and Pax eat crickets as if they are Doritos.

Nicole Kidman admits that she is one of the 2 billion people who eat insects. Through Vanity Fair’s Secret Talent Theater, Nicole is seen eating four insect meals and is definitely not grossed out by it. She who did not waste the opportunity ate all the insects.

Nicole even suggested viewers watching the video to try the crickets and fried grasshoppers.

In the travel documentary ‘Down to Earth’ featured on Netflix, Zac Efron travels the world to find ‘new perspectives on some very old problems’ and he is seen eating bugs in some episodes. In 2010 when he mentioned he loved eating exotic food, Zac was tested on George Lopez’s show when offered a scorpion meal. Efron said it was ‘very good’ but admitted that Taiwanese cricket tasted better.

Who would have thought that such a handsome man like Justin love to eat insects? At the launch of his album, Man of the Woods in New York City, Justin has prepared an exclusive launch party.

Among the menus he served were ants covered with garlic and rose oil and locusts. The menus are served by one of the world-famous restaurants, Copenhagen’s Noma.

While broadcasting live on David Letterman’s show, Salma Hayek told him that insects have been her diet food since she was a child. The Mexican-American-Lebanese actress also said that fried insects are a traditional aperitif in Mexico.