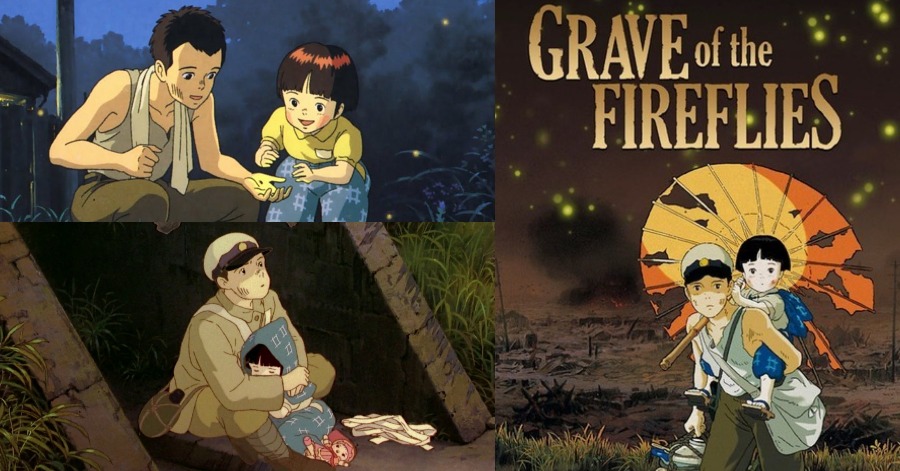 “Grave of the Fireflies”, a 1988 production from the famed Japanese animation house that is Studio Ghibli is definitely one of the saddest animated movies has ever made. This movie resets all the expectations of what an animated movie can be if the men and women behind the production choose to move in unconventional directions.

“Grave of the Fireflies” is actually based on the short story of the same name by novelist Akiyuki Nosaka, who lived through the bombing of Kobe while he was a child. He lost two sisters to malnutrition, and his adoptive father was also killed. Nosaka reportedly spent the rest of his life wrestling with guilt over their deaths.

What “Grave Of The Fireflies” Is About

The movie is about two children from the port city of Kobe, made homeless by the bombs. Seita is a young teenager, and his sister Setsuko is about 5. Their father is serving in the Japanese navy, and their mother is a bomb victim. Seita kneels beside her body, covered with burns, in an emergency hospital when he met his mother. Their home, neighbors, schools are all gone.

For a time an aunt takes them in, but she’s cruel about the need to feed them, and eventually, Seita finds a hillside cave where they can live. He does what he can to find food, and to answer Setsuko’s questions about their parents. The first shot of the film shows Seita dead in a subway station, and so we can guess Setsuko’s fate. We are accompanied through flashbacks by the boy’s spirit in the whole movie.

The boy and his sister must find a place to stay, and food to eat. In wartime, their relatives are not kind or generous, and after their aunt sells their mother’s kimonos for rice, she keeps a lot of the rice for herself. Eventually, Seita realizes it is time to leave. He has some money and can buy food but soon there is no food to buy. His sister grows weaker.

What Can Be Said About “Grave Of The Fireflies”

“Grave of the Fireflies” is many things in one movie. It is a story of sibling bonding, a tale of survival, a struggle against the ugly side of human nature, and a reminder that the greatest victims of any war are often the ones whose stories are never told. The movie doesn’t question the “rightness” or “wrongness” of the war or its various military engagements but it shows that when powerful people use those without standing as tools and pawns, the collateral damage can be devastating.

Seeing a movie like this really changes attitudes about war. All about who really suffers, and that the honor and glory is shallow comfort when you contemplate what has been lost in the struggle.

First Time In 200 Years, A New Blue Pigment Is Up For Sale