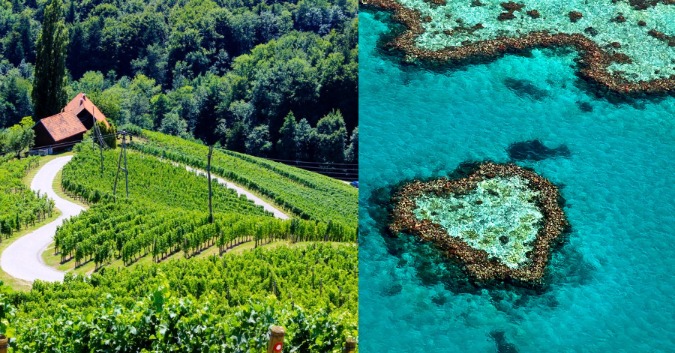 Celine Dion’s ‘My Heart Will Go On’ is about remembering lost loves. Well, whatever emotional wound your heart suffers from, traveling to these places might heal you of whatever or whomever you have lost.

Here are some of the beautiful heart-shaped places in the world that you may visit. You may need to pack your hiking shoes and bring your drone to capture this breath-taking scenery.

This is a naturally formed freshwater lake in the southeast of Tomakomai city. You may need to hike the Sarudake Mountain Path to see it at its full glory. A trip to the lake in autumn will let you see a spectacular view of the lake garlanded by bronze leaves.

Popularly known as ‘Lover’s Island’, this natural island is a testament to how mother nature also is not immune to cupid’s arrows. This Island also hosts Valentine’s Day special boat rides. There’s an idea for a memorable valentine.

A trip to Australia won’t be complete without visiting The Great Barrier Reef. If you have the budget, book a helicopter or seaplane ride to see The Great Barrier’s Reef from the air, and voila! The Heart Reef or a coral “bommie” as the locals call it is an outcropping that is 56 feet long. The area is off-limits to snorkelers and divers due to its protected status.

On a hike through the Upper Antelope Canyon, you may find a heart that has been naturally shaped through eons of erosion. You may need a Navajo guide to visit the canyons themselves since it is a huge 27,000 square mile area.

The only man-made place in this place is in this quaint nation in Central Europe. It is home to mountains, ski slopes, and wineries. A lot of the wineries are family businesses. A hidden gem in the country is a winery with the heart-shaped road in the town of  Špičnik, which is close to the northern border with Austria.

So maybe you can get your passport ready for a cross-border trip after a stop at this place.  The road is on a tourist farm; Dreisiebner. Interestingly, the owner says it was created for practicality, as the road to their home was dangerously steep.

Movie Review: Reasons Why ‘The Little Thing’ Is A Good Movie