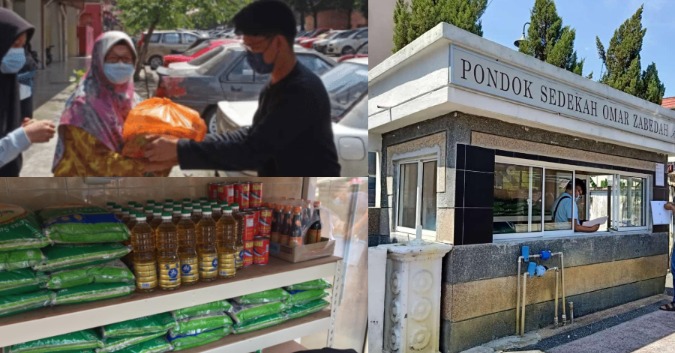 Recently, a tweet from a girl named @nurhashaidris has gone viral after she uploaded two photos that attract netizens.

my mom just opened a pondok sedekah in honor of her parents. 🥺 if anyone you know is staying around keramat or kampung baru and in need of essentials, do drop by. 🤍 pic.twitter.com/l1c7liUMZ5

“My mom just opened a Pondok Sedekah in honor of her parents. If anyone you know is staying around Keramat or Kampung Baru and in need of essentials, do drop by”.

‘Pondok Sedekah Omar Zabedah’ is located in front of Omar Ali Villa, Kampung Baru Kuala Lumpur. The purpose for this facility to be built is to help those out there who are in need of essential items and also in distress.

Nur Hasha also said that she feels so happy when the tweet went viral as there are many people help her and her mother in the form of money so that they can channel aid to those in need through ‘Pondok Sedekah Omar Zabedah’.

Thank you so much for the overwhelming support!! I didn’t expect my tweet to reach out to so many people. My family appreciates each & everyone one you. If you’d like to contribute in means of donations, feel free to DM me! We’re buying more supplies tomorrow 🤍🤍

They also have recently restocked the supplies and added more essential items at ‘Pondok Sedekah Omar Zabedah’. This is done by the family regularly so that they could continuously help other people in need.

Nur Hasha also mentioned that her mother loves for her and also her siblings to be involved with the donating process. Just now, they just went to Ampang to hand out essential items for 25 families there. They also planned to go to Gombak next so that they are able to help many other people that are less fortunate.

After been asked what are some of the challenges that the family has to face throughout the process of building this ‘Pondok Sedekah Omar Zabedah’, Nur Hasha answered: “Building the Pondok itself wasn’t really hard for us as my mother has been planning it for months now. The hardest part came after as we didn’t know where to find people in need of these essentials or how to let them know of our Pondok. However, after posting my tweet, many came forward and contacted my mother to ask for help. Twitter really helped our cause in such a short period”.

Looking at the comment section, netizens praised and admired their efforts as a family in helping people in need.

This kind of effort that this family has done is exactly what the world needs nowadays. Nur Hasha also mentioned, “As for any advice, my father mentioned to me ‘Do open your eyes and ears as your neighbor might be in a difficult situation’. This is based on one of the Islamic Hadiths that says ‘He is not a believer whose stomach is filled while the neighbor to his side goes hungry’.”