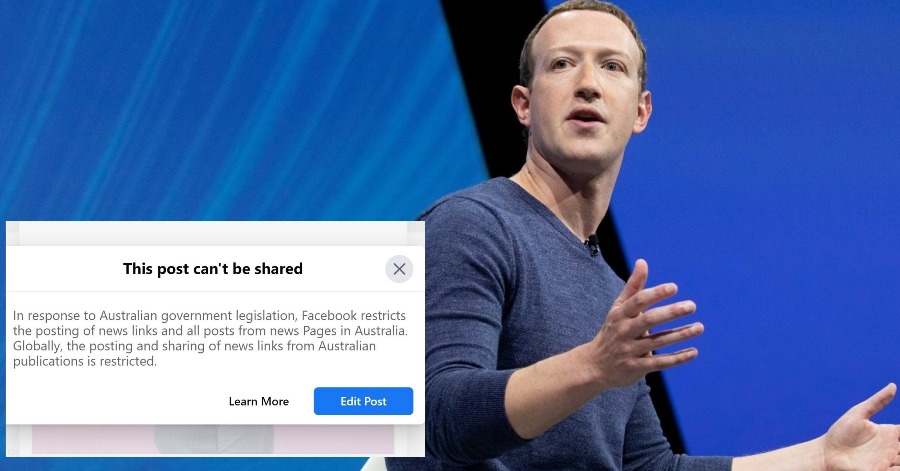 On the 18th of February 2021, Facebook bans Australian news outlets on its platform, restricts people in Australia from accessing news. Because of that, every people and also publishers in Australia can no longer share and view news in the country either.

The ban by the social media giant came shortly after the Australian House of Representatives passed proposed media bargaining laws that will require social media companies to pay their media outlets for using their content. The bill is expected to pass the Senate and become law as early as later this month.

While Facebook went through with its ban, Google has agreed to pay Australian news outlet that is the ‘Nine Entertainment Co’ more than A$30 million annually for the use of its news content. ‘Nine Entertainment Co’ is actually Australia’s largest domestic media company that owns ‘The Sydney Morning Herald’ and also ‘The Age’. Other than that, Google has also agreed to pay two other Australian media outlets for the use of their news content.

The managing director of Facebook in Australia and New Zealand wrote in an open letter that the proposed law by the government ‘fundamentally misunderstands’ the relationship of Facebook’s platform and also publishers using it to share news content. It also stated “It has left us facing a stark choice: attempt to comply with a law that ignores the realities of this relationship or stop allowing news content on our services in Australia. With a heavy heart, we are choosing the latter”.

Australians using Facebook to connect with friends and family, grow their businesses, and join communities will not be affected by the change. Easton also added that he hoped for the Australian government to recognize the value that the platform already provides, and to work with them rather than limit our partnerships with publishers.

On Twitter, hashtag #DeleteFacebook has also been trending in the country:

Australian Community Media asks us to #DeleteFacebook following its decision to remove news from its platform.

'Facebook's action will take what is already a breeding ground for untruths and turn it into a festering swamp of disinformation.'https://t.co/ZIl4sotCE8 pic.twitter.com/8txSWSoBC6

Well, that’s a tantrum. Facebook has exponentially increased the opportunity for misinformation, dangerous radicalism and conspiracy theories to abound on its platform. Even more important to subscribe to a news outlet you respect. I suggest @smh obvs pic.twitter.com/6gwopjZJt0

#DeleteFacebook if you're only reason is to read the news, in which case all news outlets have their own apps.

Turkish Man Arrested For Killing His Pregnant Wife, Pushes Her Off Cliff For Insurance Money