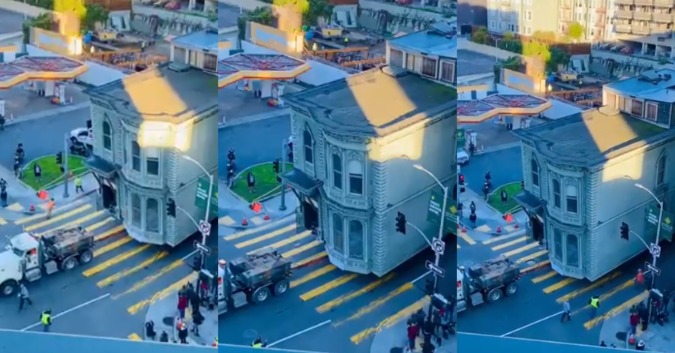 It is said that the house was moved to a new location, within six hours.

“This is phenomenal to see this humungous seven-bedroom house being moved,” said Wanda Ramos who lives near the original location of the residence.

A resident, Gary Carter who lives near the new location of the house also admitted that the process of moving the house was quite amazing.

“This is pretty big, pretty amazing,” he said.

The relocation of the historic building caught the attention of many San Francisco residents. The historic event was recorded from every angle by hundreds of city residents.

Some describe it as a scene in the Pixar movie ‘Up’ when a house is moved by a balloon.

“There’s been a few glitches on the way. Trees that were in the way, stop signs, lights, and signs and what not,” said Lana Costantini with the San Francisco Historical Society

“They hit a light pole right there at the corner of Golden Gate and Franklin and also they hit a couple of trees,” said Eddie Ramos who closely watched the move.

However, tree cutters were getting ready, while the road was closed and police controlled.

Historians say it was the first time since 1974 such a Victorian-era house had been moved to San Francisco.

With the relocation, 50 and 60 new units can be built at the old location.

“I was up on the 11th floor at the time looking down and I just could not believe what was going down, I thought this is one for the history books,” added Eddie Ramos.
However, the transfer process is not an easy task.

Electric lines, parking meters, and street lights were removed to allow the house to be moved. In addition, some bus routes also had to re-route.

Nothing to see here, just a historic San Francisco Victorian home coming down the street! Today it’s being moved 6 blocks for more than $400,000. It’s old location near Turk and Franklin will soon be home to more than 60 apartments. @abc7newsbayarea
Courtesy: Lehoa Nguyen pic.twitter.com/3ztOAtaVRU

How To Register For The COVID-19 Vaccine On MySejahtera App? Follow These Simple Guides