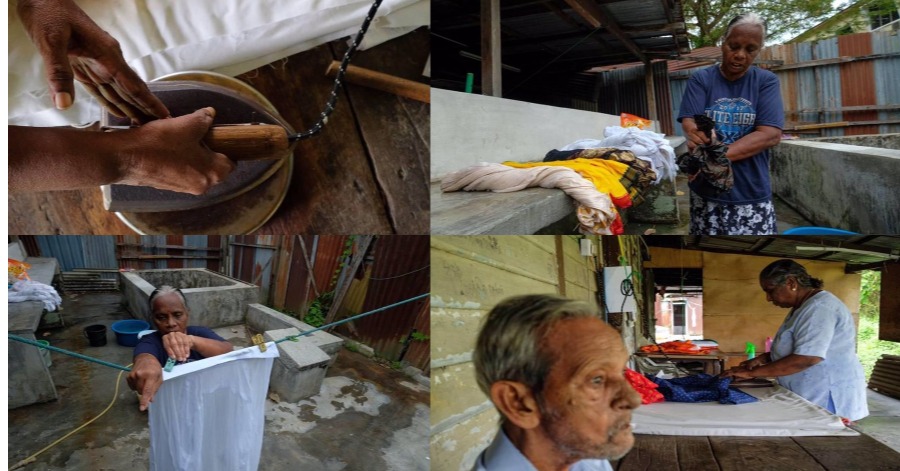 IPOH, March 24  — With the proliferation of self-service modern launderettes that cater to the need of the people for crisp and wrinkle-free clothes that will not take too much of their time, not many people will pay much attention to an old launderette that still uses the traditional way of washing dirty laundry.

However, there are still those who seek laundry services using the old ways such as that offered by a launderette in Jalan Silibin, Ipoh.

The operator, K. Elangovathy, 74 said the business was founded by her late husband S.Supramaniam 46 years ago, a legacy she decided to continue with the help of her sister-in-law S.Susila, 68.

The septuagenarian who hails from Ipoh said she would iron each item of clothing using a 50-year-old electric iron which she claimed could remove wrinkles much easier, before folding them and handing them back to her clients.

She said the garments would be soaked in water using detergent and fabric softener while for white fabrics she would add the baking powder into the water to make them whiter and cleaner.

“For sarees, they have to be brushed with soft-brittle brushes to maintain the quality of the fabric as they are delicate,” she said.

According to Elangovathy the clothes will be soaked in water for less than 30 minutes and will be cleaned using brushes before they are dried under the sun for a certain period depending on the thickness of the garments.

Elangovathy said she was aware of how the technology has changed in laundry services, adding that she would continue this traditional legacy left by her late husband as long as she could manage.

“Now, my sister-in-law and I are old and not well, so I will only take about 20 pieces of clothing a day compared to hundreds that we used to wash,” she said adding that they used to make up to RM600  a day but now due to her deteriorating health, she could barely make RM50.

She said she would charge between RM3 and RM10 depending on the types of garments send to her.

K. Kumaresan, 58, a regular customer said he would send traditional Indian clothes such as sarees or dhotis every three months to Elangovathy, adding that he was always satisfied with the services provided by the launderette.

“The clothes that they wash are very clean and folded neatly, just the way I like.  It is not the same if done by a regular launderette,” he added.

Elangovathy’s traditional launderette opens from Monday to Friday, 9 am until 5 pm, and closes on weekends.

YouTube Review: ‘One For All, All For One’, This Short Film From Singapore Surely Warm Everyone’s Heart