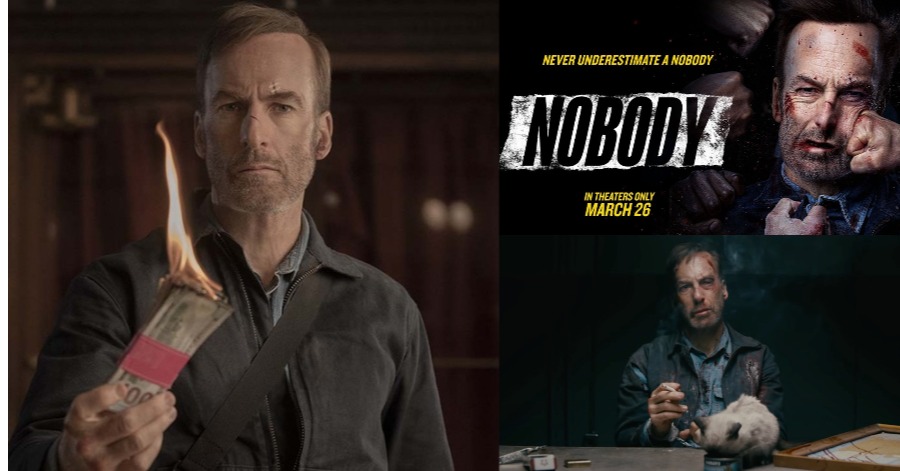 Nobody is a 2021 action-comedy starring Emmy winner Bob Odenkirk best known for his roles in Breaking Bad and Better Call Saul. It is about a normal suburban man, Hutch as he navigates his mundane day-to-day life. Until one day, something went wrong and his old life clashes with his new one.

Directed by acclaimed filmmaker Ilya Naishuller who directed the first-person POV action movie Hardcore Henry and written by a writer from the John Wick franchise, Derek Kostad, it is a genius blend of humor and action.

Hutch Mansell is an ordinary, overlooked suburban father and husband. A ‘nobody’ if you will. He deals with life day to day with his normal family and normal life. But something is bubbling inside of him waiting to explode. And rightfully so when two thieves break into his home. A series of mishaps forcing him to reveal his previous life to his family. And he has to deal with family emotions and a barrage of fists and fire to save his family.

The story reminisces Ashton Kutcher’s movie Killers; where an assassin desperately defends his new life against the bounty on his head. But without the Hollywood typical physique, this is just Odenkirk’s everyman persona. If you’re expecting six-packs abs, you won’t get it. But good humor with action and gore? Yes.

No one would expect Bob Odenkirk to become a tough action character. When the trailer was released it was totally unexpected. He fits in so perfectly as a role of the suburban father and husband. But he also brings the skills in beating people up. He is the perfect choice for the character.

Some people also commented, “Finally, a normal-looking guy I can relate to. Not The Rock, not Statham, not Willis, not Cruise, not the same face we see in action movies. Just a regular guy! I really want to see this.”

Furthermore, this proves that Odenkirk is more than just a typecast. The man is a versatile actor and it shows in this movie. “I never knew I wanted to do an action film so bad,” Odenkirk said to IGN. It started a few years prior and he was surprised to receive encouragement especially considering his normal roles and physique. “And you don’t usually get that response from Hollywood,” he added. His training lasted for almost two years for this role and it definitely paid off.

Since it comes from the writer of John Wick, some of the action feels like a copy of the action franchise. However, with the different spin on family and well-added humor, this becomes a thing of its own. Hutch is not John Wick at all. The only point of similarity is their fighting ability. An action movie from a fresh perspective is exactly what everyone needs.

Odenkirk does most of the stunt work in a nice wide-shot, akin to John Wick. Critics like Chris Stuckmann praised his performance showing that age is just a number.

However, Hutch is not as perfect as Wick. He falls, he gets defeated sometimes which adds to the vulnerability of the character. Of course, there is some realism there since Bob Odenkirk IS older than Keanu Reeves. But the fact that he is able to pull it off is praiseworthy nonetheless.