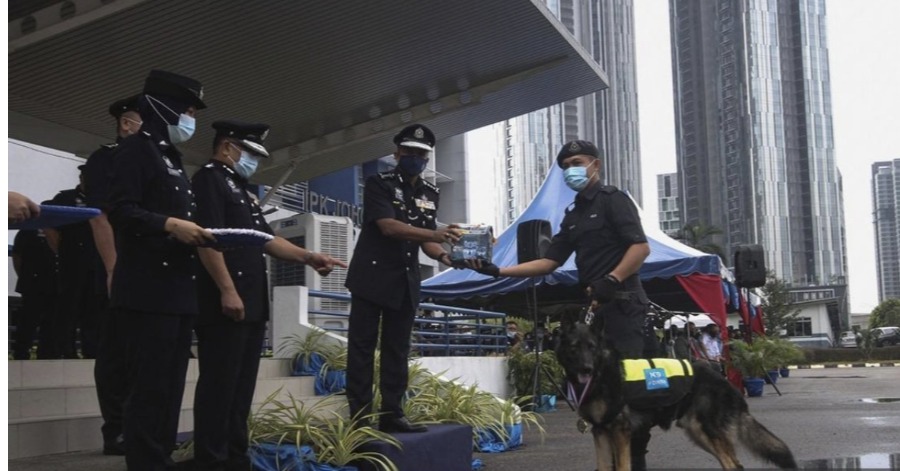 This recognition was due to their successes in locating bodies in several high-profile criminal cases which included finding the body of a woman believed to have been killed by her husband in Kota Tinggi, earlier this month.

The medals and certificates were received by the canines’ two trainers, L/Cpl K. Thiru and L/Cpl Carlvin Maluni, who then put the medals around Mailo and Barny’s necks.

Carlvin, 29, when met by reporters said this is the first time he and Barny have received an award since he began training the dog in 2019.

“We (Carlvin and Barny) started training in November 2019. He (Barny) is friendly and like to be pampered during leisure time…but at work (on assignment) he is fierce,” Carlvin said.

Mailo, meanwhile, is described as a dog that is very cooperative during work,

“The two dogs were assigned to assist the police including locating bodies, investigating robbery cases and finding missing persons.

“Training Mailo is not difficult because it likes to be pampered and is obedient. The dog also goes for monthly health check-ups,” said Thiru, 27.

Earlier, at the ceremony, a total of 139 officers and men, civil servants and members of the public including media practitioners received Certificates of Appreciation from the Johor police chief. Johor Bernama bureau chief Nor Baizura Basri was among the media recipients.

A total of 27 officers and police personnel also received Integrity Awards and awards from the Inspector-General of Police.