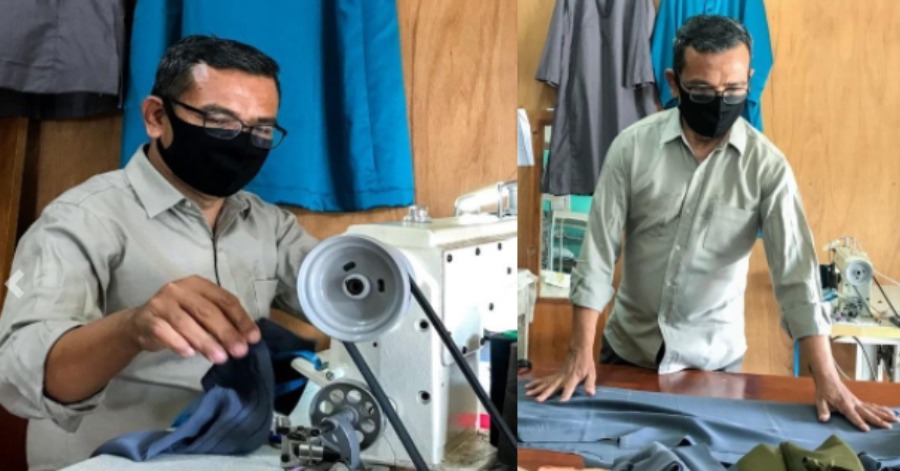 MACHANG, April 20 — It is certainly a blessed and happy Ramadan this year for former  Al-Ma’unah member Che Sabri Che Jaafar, 51, because for the first time, after spending 20 years behind bars he gets to observe fasting month with his mother, Rohmah Karim, 79.

Che Sabri, who was released on August 17 last year after Yang di-Pertuan Agong Al-Sultan Abdulllah Ri’ayatuddin Al-Mustafa Billah Shah pardoned him, is grateful to be able to enjoy again the joyous spirit of the holy month, including breaking fast, waking up for the pre-dawn meal (sahur) and performing tarawih prayers at home.

“After 20 years of spending Ramadan in prison, I am thankful beyond words to be back again with my family, especially my mother,” he said when met by reporters at his home where he operates his tailor shop at Pekan Pulai Chondong, here.

Che Sabri, the seventh child among 10 siblings said, he was glad to have the opportunity to cook his favourite dishes especially nasi kerabu to break fast with his mother.

“Last year during Ramadan I only get to eat whatever was served by the prison authorities, I never dreamed that I will get to enjoy all my favourite food again, what more, having nasi kerabu on the first day of Ramadan recently,” he said.

Che Sabri said, although he had got used to living in prison and celebrating Hari Raya only with the other inmates, it had always been sad when Ramadan approaches because it was during the holy month that he missed his family most and longed to be home with them.

“Back then, I used to break my fast, wake up for sahur and perform tarawih prayers all alone. As I had so much time in my hands then, I  could complete reading the Quran every month but now I have to allocate specific times of the day to sit and recite several pages,” he said.

Elaborating, Che Sabri said he now runs a men’s tailor shop ‘CSCJ Tailor’ which he started in October last year and business has been picking up ever since.

“Right now I have almost 100 orders which must be ready before Hari Raya, “ he said adding that he takes orders for all kinds of men’s clothing such as baju melayu, kurta, robes and so forth and the price ranges from RM120 to RM150.

“I have stopped taking orders since the start of Ramadan as I am afraid I may not be able to get them ready in time for Raya. Each day I work from 9 am to 4 pm and I can get two suits ready in a day,” he said.

Che Sabri added that he obtained his Malaysian Skills Certificate (SKM) in tailoring while in prison and he hoped to expand his business further in future.

“I want to help former prison inmates who have sewing skills to venture into this business for them to earn a living once they are out of prison. To help them get started, I have got them to help me with some of my customers’ clothes,” he said.

He was sentenced to life imprisonment since 2000 under Section 121 of the Penal Code on charges of waging war against the Yang di-Pertuan Agong when he was with the Al-Ma’unah Organisation.

Look Incredibly Ripped! These Muscular Body Suits Will Turn You Into A Gym Buff