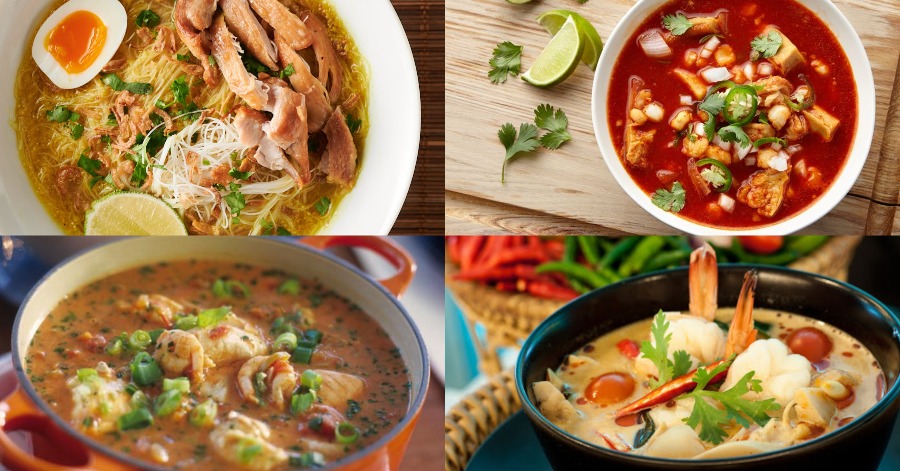 Soups are definitely one of the best food selection that has ever been made because it uses such an easy recipe to make and also it tastes delicious. According to a source, soup is primarily liquid food and generally served warm, hot, or even cold. It is made by combining ingredients of meat or vegetables with stock, milk, or water. Hot soups are additionally characterized by boiling solid ingredients in liquids in a pot until the flavors are extracted, forming a broth.

Soups are similar to stews, and in some cases, there may not be a clear distinction between the two. However, soups generally have more broth than stews. In fact, there are so many different types of soups being made from different countries. Of course, different countries would follow different recipes according to their taste palate. Because of that, we are lucky enough to try and taste all of these different soups.

These are 5 of the best soups ever made from all around the world.

Yayla çorbası is also known as yogurt soup and it is a meal of Turkish cuisine. It is a yogurt soup cooked with a variety of herbs, rice, and chickpeas. It is also a common dish among Assyrians. Boiled rice or barley adds grainy sweetness to this creamy yogurt soup. It’s believed to ward off colds during winter; some Turkish hospitals even serve yogurt soup to recovering patients. A crumble of dried mint helps balance the yogurt’s slight tang. Serve with a pillowy round of fresh pita bread.

Tom Yum Goong is a type of hot and sour Thai soup, usually cooked with shrimp. It has its origin in Thailand. The words ‘tom yum’ is derived from two Thai words. Tom refers to the boiling process, while yum means ‘mixed’. Sweet, sour, spicy, and salty, this soup’s magnificent broth is the ideal foil for sweet, tender shrimp. Aromatic ingredients include galangal, lemongrass, and lime leaves, while slivers of bright red bird’s eye chilis add additional heat. Tom Yum Goong is just one of many varieties of tom yum soup in Thailand and this version comes enriched with fat prawns and is a favorite with many diners.

Soto Ayam is a yellow spicy chicken soup with lontong or nasi himpit or ketupat and/or vermicelli or noodles, it is from Indonesia, and popular in Singapore, Malaysia, and Suriname. Turmeric is added as one of its ingredients to get the yellow chicken broth. Chicken noodle soup may reach its culinary pinnacle in this piquant Indonesian dish. Spices such as fresh turmeric, star anise, cinnamon, lemongrass, and lime leaves combine for deeply layered aroma and flavor, with the jammy yolks of soft-boiled eggs to add extra richness. Every part of Indonesia has a local twist, and the soup is also beloved in Singapore, Malaysia, and in faraway Suriname in South America, where the recipe arrived with Javanese immigrants. Eat topped with fried shallots, fresh limes, and a fiery scattering of sliced red chilies.

Palm oil and tomatoes tint coconut broth a warm, orangey-red in this specialty from the Bahia region of Brazil, where locals eat steaming bowls on even the hottest days. This soup’s real draw is sweet, tender shrimp floating in the broth, however. Traditionally, moqueca de camarão is cooked in a handmade pot made from black clay and the sap of mangrove trees, then brought to the table in the same authentic vessel.

In Mexican cuisine, Menudo, also known as pancita or mole de Panza, is a traditional Mexican soup, made with cow’s stomach in broth with a red chili pepper base. Hominy, lime, onions, and oregano are used to season the broth. Tripe simmered for hours in a piquant, garlicky broth is the ultimate Mexican hangover cure, but menudo goes far beyond morning-after remedies. It’s a favorite at weddings and big occasions, too, when an enormous pot of the traditional soup can feed dozens of guests. It’s sheer comfort food, with kernels of hominy that get a fresh bite from a garnish of raw onions, chiles, and cilantro. Choose from one of two main varieties: Menudo Rojo turns a deep red from chiles in the broth, while Sonoran-style Menudo Blanco is a milder alternative.