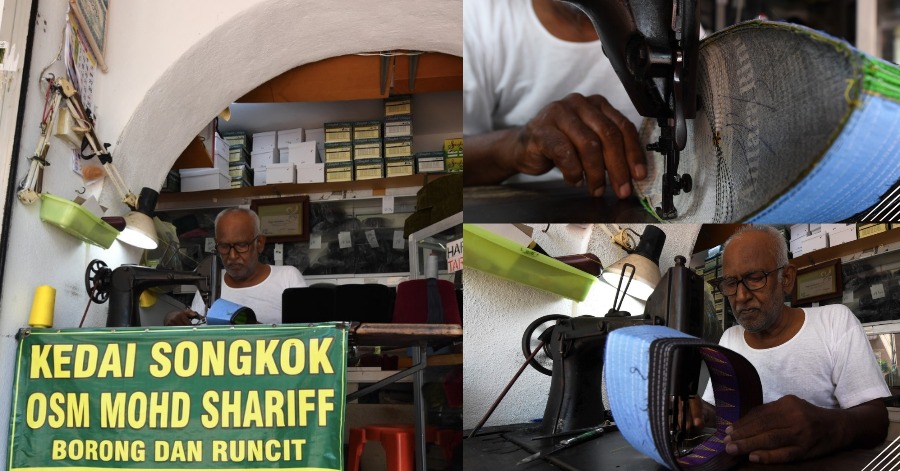 It had served his father many years after he opened Kedai Songkok OSM Mohd Shariff in Lebuh King in 1936.

It was used to give fully handmade songkok a neater finish, said Haja Mohideen who started being his father’s apprentice after school hours when he was 12 years old.

Today, the machine is still being used to fulfil songkok orders for Hari Raya Aidilfitri.

“If it needs repair, I do it myself. It was with my late father a long time and now it is serving me faithfully. So if it needs fixing, I know what to do.

“The machine has sentimental value so I couldn’t possibly sell it. Someone once offered me RM3,000 for it but I declined,” he told Bernama.

His 6ft x 12ft (1.8m x 3.6m) shop is next to Nagore Dargha Sheriff mosque and he can be seen from outside working tirelessly at his black sewing machine every day.

He recalled that when he was young, he was only permitted to cut the fabric for the songkok and do small tasks, while his father did the stitching using the machine.

“Since small, I watched one songkok or tarboosh after another – that was made using this machine — being sold to customers. And till today, their descendants still patronise the shop (to get a songkok) for Hari Raya, an engagement, school, etc. It gives me immense happiness,” said Haja Mohideen.

Haja Mohideen, the third child in a family of seven children, said his father passed down the skills only to him.

He said that he joined the business after finishing school and that he was able to raise two children on the income.

He said there were many people making songkok the traditional way before but after they died, there was nobody to carry on the legacy.

He said the songkok-making process begins with a frame which is an oval and rectangle cut from an 18-layered sandwich of newspaper, brown paper and cloth stitched together.

“This year demand is high, unlike last year when people were under a strict movement control order,” said Haja Mohideen.

Hence, he and his apprentice, Abdul Kader Mydin – who is also his son-in-law – will be working till Hari Raya to finish orders for the songkok which are priced between RM20 and RM45.