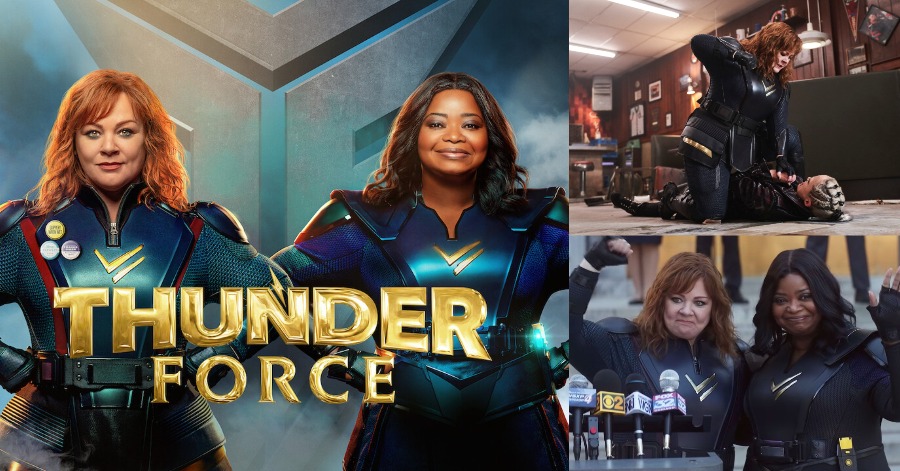 Thunder Force is actually a 2021 American superhero comedy film written and directed by Ben Falcone, and starring Melissa McCarthy, Octavia Spencer, Bobby Cannavale, Pom Klementieff, Taylor Mosby, with Melissa Leo, and Jason Bateman. It is the fifth collaboration between McCarthy and her husband Falcone. In this movie, two childhood best friends reunite as an unlikely crime-fighting superhero duo when one invents a formula that gives ordinary people superpowers.

The film was digitally released by Netflix recently on the 9th of April 2021. In a world terrorized by supervillains, one woman, scientist Emily Stanton has developed the process to give superpowers to regular people. But when her estranged best friend Lydia accidentally imbues herself with incredible abilities, the two women must become the first superhero team. Now, it is up to Thunder Force to battle the super-powered Miscreants and save Chicago from the clutches of The King.

What ‘Thunder Force’ Is About

It is about Lydia and Emily who are two fortysomething women who were close friends from grade school through high school but haven’t seen each other in decades. Lydia was always brash, friendly, and fearless, but she was never much of a student. Emily, on the other hand, was a shy, brilliant nerd, obsessed with avenging her parents. As the film’s opening sequence explains, via a series of moving comic-book panels, “a massive pulse of interstellar cosmic rays” struck Earth in 1983, giving superpowers exclusively to sociopaths. The resultant supervillains were dubbed “Miscreants”. Emily’s scientist parents were killed by Miscreants, and she’s made it her life goal to continue her parents’ work and find a way to give ordinary people powers, creating heroes to fight the villains.

When Lydia and Emily reunite in middle age, Lydia is a forlorn and seemingly friendless forklift driver, and Emily is the head of a thriving tech corporation on the brink of achieving that goal, alongside her brilliant 15-year-old daughter Tracy and their ex-CIA enabler Allie. Of course, Lydia manages to blunder in and insert herself into the process, so after a lengthy, unlikely series of treatments, she winds up with super-strength. Before long, Emily has her own super-ability, and they’re off to fight crime together.

What Can Be Said About ‘Thunder Force’

This movie has a lot of representations of female superheroes and what women are actually capable to do in their daily life. Netizens love that the movie includes smart, Black women and girls in lead roles. It is so inspiring. Thunder Force fans bring up a great point about the way the film handled diversity, which is honestly great to see as it helps break up the movie filled with an obscene amount of absurd and asinine concepts and humor.