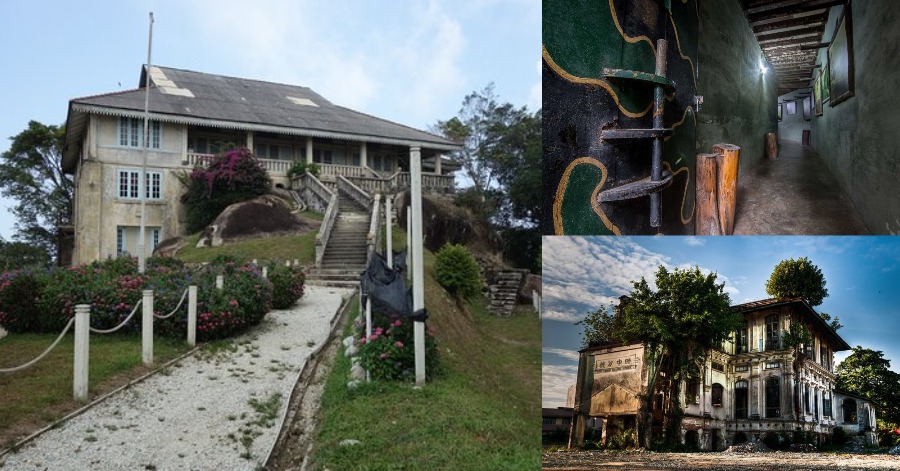 It is undeniable that our world does not consist of human being only. It also consists of other animals, entities, and also something that could not be seen by the bare eyes of human beings. This is actually the group of creatures that should be aware of by others so that we do not disturb their own ecosystem. Even in Malaysia, these stories about ghosts are actually true and exist among us.

Malaysia is a diverse place, abundant in different cultures, and offers up many interesting locations to explore. Some of these sites in Malaysia may still hold scars from darker times of war or have remained tainted from torture and death. Needless to say, Malaysia has more than its fair share of ghosts. These are the 5 most haunted places in Malaysia.

The 99 Door Mansion is one of the most haunted places in Malaysia. The abandoned mansion is a stunning sight, sitting secluded within an old plantation. The mansion was built during the 1800s for a wealthy family who had emigrated over to Malaysia from England. Their new mansion was to be more of a curse to this family than a home. In 1948 the family’s grandson was shot dead on the entrance stairs to this mansion. Other rumors exist that the entire family had also been murdered upon the grounds of the mansion after the Japanese had invaded Malaysia.

Either way, the 99 Door Mansion was left abandoned by the 1950s. This was when a Bomoh, or Malaysian Witch Doctor, moved in. It is told that all sorts of black magic occurred here, including the opening of portals to the other side. This is rumored to have brought an array of dark spirits to the mansion, many of which remain today.

The Penang War Museum is a truly disturbing omen to the war-torn past of Malaysia. It exists within an actual fort that became occupied by the Japanese during WWII. Because of this, it also took on the purpose of acting as a POW camp and in turn saw many people tortured and executed.

Many areas of the museum are now haunted. None more so than the underground tunnels, which run deep beneath the grounds of the museum. It is here that many people have claimed to capture sight of a Japanese executioner, which would be a terrifying vision in the claustrophobic depths of these dark tunnels.

Yet another school with eerie ghost stories and legends surrounding it makes this list. The SK Danau Perdana now barely stands. It was shut down in 2005 for the instability of its structure. While the locals hate the building, considering it an eye-sore, it truly is an urban explorer’s dream.

Long corridors and empty graffiti-ridden classrooms set a horror movie-like scene for the main ghost story centered here. Legend has it that this abandoned school is haunted by a Pontianak. This is a vampire-like ghost entity popular throughout Malay culture. The Pontianak is typically categorized as being created from the death of a pregnant woman during childbirth and is a truly terrifying figure in mythology. The origin of this school’s Pontianak is believed to be a former cleaner, who unfortunately passed away during childbirth.

The Shih Chung Branch School is an overgrown shell of a building once used to educate the future. After Malaysia was occupied by the Japanese during WWII the school was seized and repurposed for far darker tasks than arithmetic and spelling. It is said that the Japanese actually used the school as a type of administration building where some disturbing events were doomed to unfold. These included but were not limited to interrogations, torture, and executions.

Legends surround this old school like a bad smell. It is said that the execution victims’ ghosts remain alongside those of a select few Japanese soldiers. Many people have claimed to sight these spirits, hear them, and even become suddenly struck down by overwhelming feelings of illness within the abandoned school.

Located on the side of Penang Hill is our first haunted location. The Crag Hotel has a rich history and gives off some seriously eerie vibes. This set of abandoned, heavily decayed buildings date back to the late 1800s and have had various purposes in life. It started out as a hotel but has also been a private residence, school, and even a film set for a popular BBC television show.

While the Crag Hotel certainly doesn’t have any substantial ghost stories, there are whispers amongst locals which hint this place may be haunted. By whom or what, no one really knows, but it does seem plausible that energy from the past may have become trapped here.

Meet Julius Maggi, Founder of The Most Popular Brand ‘Maggi’

5 Interesting Facts About Karl Marx, Known As The ‘Father of Marxism’