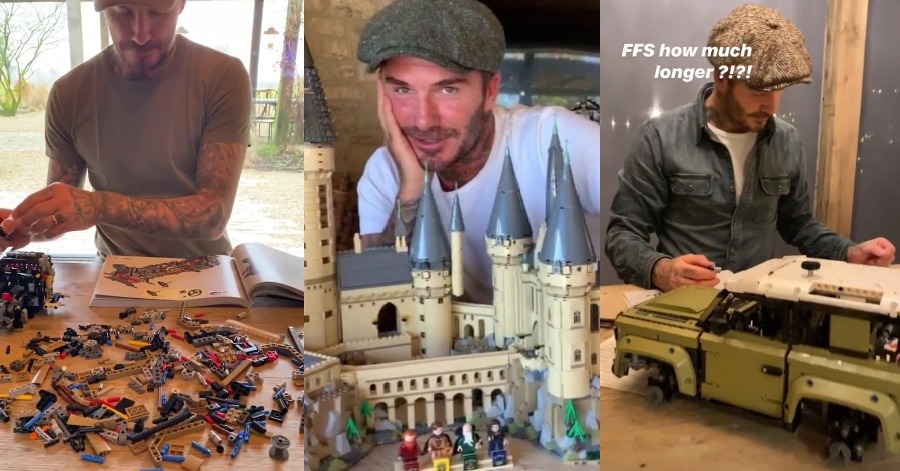 Everyone definitely has a hobby right? A hobby can be said to be a regular activity done for fun, usually in one’s spare time, not professionally or with a salary.

Among the hobbies we can do such as fishing, playing video games, reading and many more. No matter who we are, hobbies can be enjoyed by everyone.

This includes one of the legendary football players, David Beckham. Still, did you know Beckham has a hobby of building LEGO?

It is said that he is quite obsessed with building LEGO even though he is in his 40s.

The interesting hobby was revealed during his interview on The Tonight Show Starring Jimmy Fallon in 2020 and Jimmy asked him about his colorful plastic building bricks hobby.

According to Beckham, his hobby of building LEGO has started since he was 8 years old until now.

“It’s before I had kids, I grew up making LEGO when I was eight or nine years old,” Beckham explained.

If seen through the Instagram post or story belonging to Beckham and his wife Victoria, sometimes there are times when Beckham is willing to build LEGO for hours.

Through the interview as well, Beckham said his wife sometimes likes to trolls him with his hobby.

Beckham said he loves building LEGO because doing so, can keep him calm.

The 45 years old man’s hobby of building LEGO is undeniable. This is because he had previously built some LEGO on a large scale such as building Hogwarts Castle and also Disney Castle.

Apart from building a castle-shaped LEGO, Beckham also built a LEGO that can be said to be quite expensive such as the LEGO Tower Bridge which costs $400 (RM1,644). It had about 1,000 pieces and is almost a meter long, including more than 80 windows, a black taxi to drive across, and a drawbridge, which opens and closes.

However, the most expensive LEGO that Beckham has ever bought is the LEGO Taj Mahal. It is said that the set is no longer sold by LEGO and is now a valuable item with a price tag that can reach around $5500 (RM22,605).

Despite its high price, Beckham says he has never finished building it again.

“It’s going to make me sound really weird but when I was in Milan I had such a big amount of time on my hands that I found online that there’s a Taj Mahal Lego that you can buy.

“So I bought it and started building it when I was in Milan,” Beckham said in a 2010 interview.

“I only built some of it because I got injured halfway through … not building the Lego!

“I know it’s not a career but I love doing it. My boys are the same – they’re obsessed with building Lego,” Beckham added.

(Video) From Homeless Man To Fashion Model, This Man Has A Surprising Luck