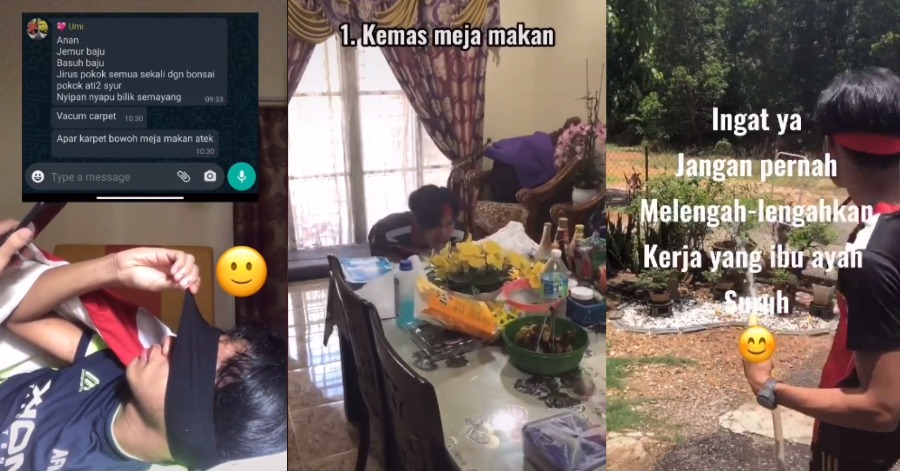 As the eldest child in the family no matter son or even daughter, it is usually something that is ordinary if they are the ones who have a lot of responsibilities to do at home. This is because they are the ones who the parents can count on as they are the eldest among the others. House chores like sweeping, washing dishes, do the laundry and many others are actually some of the familiar chores that many eldest children in this world have to do as they are growing up.

The same goes for this viral video that got posted on the TikTok app. This man that goes by the name Wan Afnan has shared a video where he shows his daily activities that he has to face as the eldest son in the family. The caption on the video stated, “Who is also the eldest son in the family? Is it true that we have to do house chores like women?”.

According to the video, it can be seen that he has been given a list of house chores that he has to do early in the morning from his mother. He then quickly gets up from his sleep and directly finished all the chores that were obliged towards him without any delay and excuses.

He starts the day by cleaning up the dining table alone even though it is heavy. Then, he vacuums the carpet. Next, he continues to do the laundry. His hilarious action in the video to joke around by washing his cat as well in the laundry makes netizens have a laugh for it. Lastly, he finished the chores by watering all the plants outside of their house.

At the end of the video, he also shared a very important piece of advice that is very important for many children out there. He stated, “Remember. Never procrastinate on the work that your parents tell you to do”. It is great advice from him. 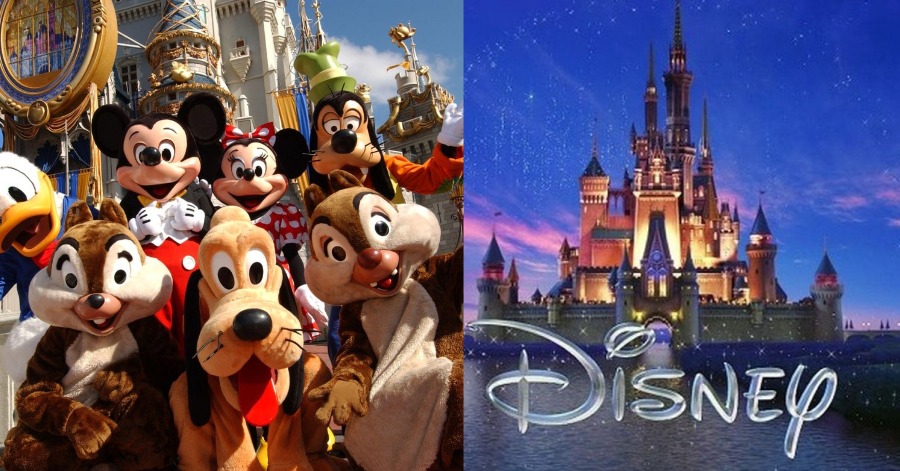 Disney, a place where all your dreams come true. What if I told you that your favorite cartoons have some pretty interesting backstories. Walt Disney Studios is famous for many of the most well-known cinematic characters of all time, from the classic to the brand-new.

However, there’s more to many of these Disney characters than meets the eye. Here are some interesting facts that you may or may not know.

Walt Disney suggested the name ‘Mortimer’ to his wife Lilian but she didn’t think that the name is suitable for the character’s personality. Walt Disney later came up with the name Mickey Mouse and the rest was history. Since 1936, Mortimer Mouse has occasionally appeared in papers and short films as Mickey’s taller, more boastful enemy.

Voice actors used to be slightly underwhelming. But today, film studios cast big stars as their voice actors. If there was a single cast that brought a shift, it was the casting of Robin Williams as the Genie in 1992’s Aladdin. Disney felt Williams was the right guy for the job, but he was apprehensive about becoming a cog in a massive merchandise-selling entertainment corporation. However, Disney was so desperate to cast him in the role that they created animations of the Genie performing his stand-up routines. He agreed on the condition that his voice not be used in any of the film’s marketing—or, worse, in dolls and other “things.” Disney then refused to comply with his requirements, resulting in a quarrel between William and Disney.

Fact 3-Anna and Elsa are technically not Disney princesses

Confusing but people commonly refer to all princesses in Disney films as “Disney princesses,” although there is an official, recognized list. Snow White, Cinderella, Aurora, Ariel, Belle, Jasmine, Pocahontas, Mulan, Tiana, Rapunzel, Merida, and Moana are the 12 “official”. There are no Anna and Elsa to be found. But how can that be since Frozen and its sequel are by far the most successful and the top Disney princess films? It’s because of that success, to be sure. Frozen was profitable enough to become a franchise of its own. Anna and Elsa don’t need the official Disney princess branding as they’re already successful Disney characters of their own. Besides, in Frozen 2, Anna is a queen and Elsa is a spirit. So they are way pass the princess title.

Fact 4- Maleficent and Cinderella’s stepmother are the same people

Picture: Inside the Magic

Both Lady Tremaine, Cinderella’s wicked stepmother, and Maleficent, the villain in Sleeping Beauty were voiced by Actress Eleanor Audley. Before her death in 1991, Audley had a successful television career, appearing on series such as The Man from U.N.C.L.E. and The Dick Van Dyke Show.

According to Smithsonian Magazine, Pocahontas’ real name was Amonute. Pocahontas was only a nickname that meant “funny one” or “naughty child.” She met John Smith when she was a youngster, not an adult, and they did not have a romantic connection. As a result, it’s made our list of the most historically incorrect films. However, this doesn’t mean that Disney accurately film what occurred in real life.

Can you guess the only two princesses with power? Yes, Rapunzel and Elsa. While most Disney princess films have a magical element to them, the main leading ladies rarely have magical talents themselves. Except for these two. Rapunzel, with her healing, radiant hair, and Elsa, with her ice abilities.

Fact 7-The Beast has features of many animals

And here we thought he was just ONE beast. Animator Glen Keane said he created the main character from Beauty and the Beast with the legs of a wolf, the tail of a dog, the body of a bear, the head of a buffalo, the eyebrows of a gorilla, the muzzle of a wild boar, and the mane of a lion.

That dog was also named Lady, and she was a Springer Spaniel that belonged to Joe Grant, a Disney writer. Walt Disney instructed Grant to make a storyboard with the dog after viewing sketches of it, but he ended up rejecting the concept. Disney didn’t revisit the tale with Grant’s initial illustrations until he heard a storey called “Happy Dan, the Whistling Dog” about a dog “from the opposite side of the rails.”

Fact 10- Winnie the Pooh name has an adorable origin

This Silly Old Bear has an unusual, even amusing, name. But there’s a reason he’s referred to as “Pooh.” The narrator in A. A. Milne’s first Winnie-the-Pooh novel recounts that Pooh would often have flies buzzing about his nose. He’d try to puff air at them, making a pooh! sound, to pull them off. 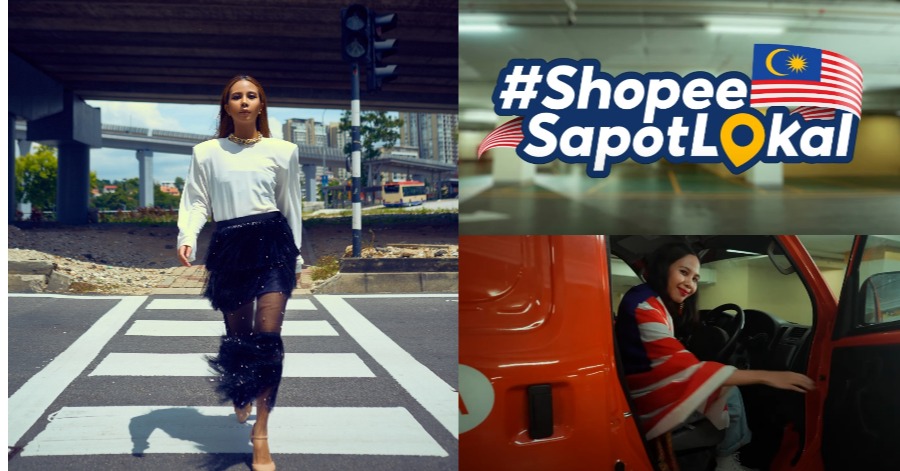 KUALA LUMPUR, 27 Aug – Malaysian rapper Kayda Aziz is set to launch a new music video with Shopee on Merdeka Day as part of the e-commerce platform’s #ShopeeSapotLokal campaign. Malaysians as well as fans of Kayda can tune in to Shopee Malaysia’s Facebook and Instagram pages, or YouTube channel, on 31 August to catch the music video.

Kayda Aziz shared, “Working on the Merdeka Day campaign with Shopee has been a delightful and eye-opening experience for me. I got really inspired when I found out about some of our successful Malaysian entrepreneurs who have been selling their products on Shopee. I’m honoured to come up with the lyrics and I feel that the future for Malaysian e-commerce is very promising.”

She added that to be given the opportunity by Shopee was a humbling experience for her. “Working with their team was overall smooth as they trusted my songwriting process and understood my style of expression in music. Despite a few limitations because of the pandemic, I am proud that we could still manage our ways to come together in completing this project while we followed strict SOPs during recording, shooting an animation video featuring local entrepreneurs. I am truly happy with the outcome of it.”

Aptly titled #ShopeeSapotLokal, the music video depicts an animated version of six members of the local seller community on Shopee in an outer space theme as a way of paying tribute to how they aimed for and landed on the moon with their businesses. Metaphorically, that is.

The sellers are Amirah Norman (PotonGuler®️), Zeeda Aziz (Pasar Kedah), Jamie Thoo (Babymart), Juhairi Aziz (Viraller), Farah Suhaimi (Intan Kek Lapis Sarawak) and Kiridaren Jayakumar (Kedai Buku Bibliophile) with unique, inspiring stories to tell. With lyrics written by Kayda herself, she raps about the efforts and e-commerce journey of these sellers, while reminding everyone to not give up and believe in themselves.

The animated music video is part of the #ShopeeSapotLokal initiative which the e-commerce platform has launched to provide dedicated assistance and to celebrate the local seller community. To amplify the support, there will also be Shop Malaysia Online (SMO) and Go-eCommerce site takeovers on 31 August and 16 September respectively, where Malaysians will receive upsized vouchers offering discounts of up to 31% when purchasing from Malaysian sellers during these two days.

SMO and Go-eCommerce are e-commerce initiatives by the Ministry of Finance (MOF), with the Malaysia Digital Economy Corporation (MDEC) tasked at driving the campaign from now till 31 December 2021.

Kenneth Soh, Senior Manager (Marketing) of Shopee Malaysia said, “Shopee seeks to continuously empower our local sellers as part of our commitment to further the country’s digitalisation efforts. This video allows us to share the success stories of our sellers to inspire others in a fun way whilst encouraging Malaysians to support local businesses. On top of that, it was an honour working with Malaysian rap songstress Kayda Aziz in bringing this music video to life with her lyrics, vocal prowess and great personality. Kayda, together with the team at Shopee, have given birth to a masterpiece which I am excited as a Malaysian for everyone to watch. I hope everyone will lend our local sellers and Kayda their support when the music video is launched. To this end, I wish my fellow Malaysians Selamat Hari Merdeka.”

In the spirit of Merdeka and unity, Shopee will be hosting a series of documentaries on Shopee Live, in partnership with the National Film Development Corporation Malaysia (FINAS). The Dari Merdeka ke Malaysia screenings portray the country’s journey towards independence and the formation of Malaysia, together with the rich heritage and culture of Malaysians. They will be streamed on Shopee Live at 9.30PM on 30 and 31 August, continued by 6, 7, 13, 14 and 16 September.

The #ShopeeSapotLokal music video and campaign as well as Dari Merdeka ke Malaysia are in conjunction with the Shopee 9.9 Super Shopping Day, currently taking place till 9 September. Shoppers can look forward to claiming Free Shipping and 99% Coins Cashback vouchers, both with no minimum spend. Users can also stand a chance to win a brand new Mercedes-Benz by participating in the Play & Win Mercedes-Benz game by collecting golden tickets daily. 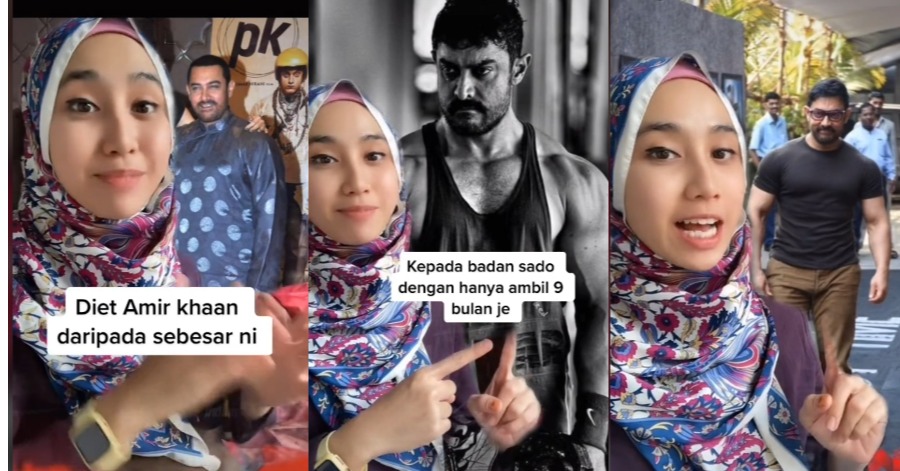 Mohammed Aamir Hussain Khan is a Bollywood actor, singer, director, filmmaker, and TV talk show host from India. Khan has established himself as one of the most prominent and important performers in Indian cinema during the course of his 30-year career in Hindi films.

If you pay close attention, you will notice that the size of his body varies in the movies he acted in. From being bulky to muscular, Khan applied a simple diet plan which only took 9 months to transform himself. Hard to believe, but it actually worked!

Here are some of his secrets:

#1- Khan does not take carbohydrates after 8 pm

#4-Khan consumes apple and banana before his workout session

#6- Drinks plenty of water every day