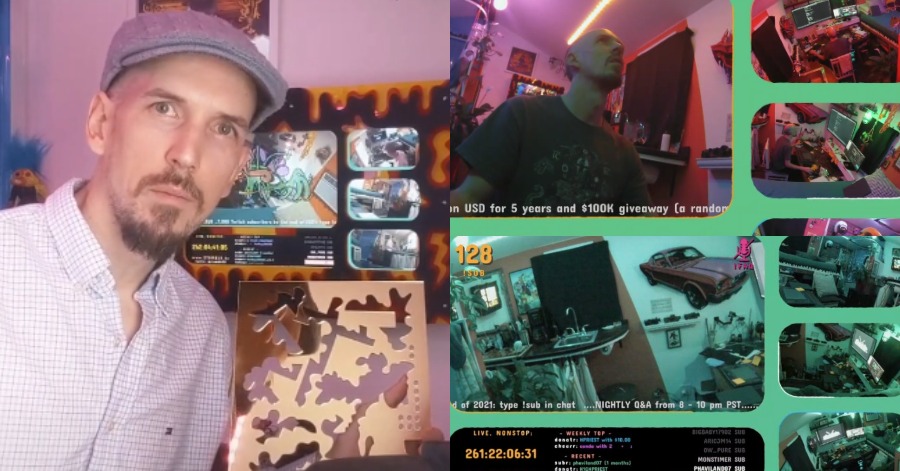 The beginning of 2021 is where most of us wished for a better year after the nightmare of 2020. One of those nightmares involves traveling restriction and quarantine.

However, a man in Los Angeles was more than happy spending his time indoors for more than three months. 34-year-old Tim C Inzana spent the first 100 days of 2021 live streaming 24/7 from a locked room and even plans to stay there for the rest of the year. He was more than willing because he gets the right financial incentive.

The artist hopes to spend at least a whole year isolated like this. And then sell his live stream in a custom frame as an unusual piece of art.

“The artwork is me creating the artwork, it would be like seeing a blank space transform into this colourful space,” Inzana told Insider Magazine. “I don’t know exactly what I’m doing, to be honest. There are elements of me just following hunches and wanting to make the world a better place.”

For now, he is streaming for free on Twitch but plans to find people willing to shell out $5 million and keep him locked for 5 years. He has also offered to stay isolated for 1o consecutive years. But only if someone agrees to pay him $10 million for the effort.

During the day, Inzana either has Q&A sessions with his viewers, having a solo dance party virtually DJed by one of his followers, eating, meditating, or working on various artworks. At night, he streams himself sleeping.

He spent months prior to his confinement preparing the shed on his property. He even consulted his family and friends about the challenge. His fiancée is given support by buying and bringing him groceries through the window.

If he isn’t able to fulfill the million-dollar investment, he is willing to keep streaming publicly for up to 5 years. This is as long as his subscriber count doesn’t fall under 7,000. At the time of this writing, his subscriber count sits at 102. He has a long way to go but one can’t help but admire his hustle.

Abu Bakar Omar, A Veteran Actor And Artist Passed Away

Man Ordered To Pay Ex-Wife $72,000 For Housework During Their 30-Year Marriage