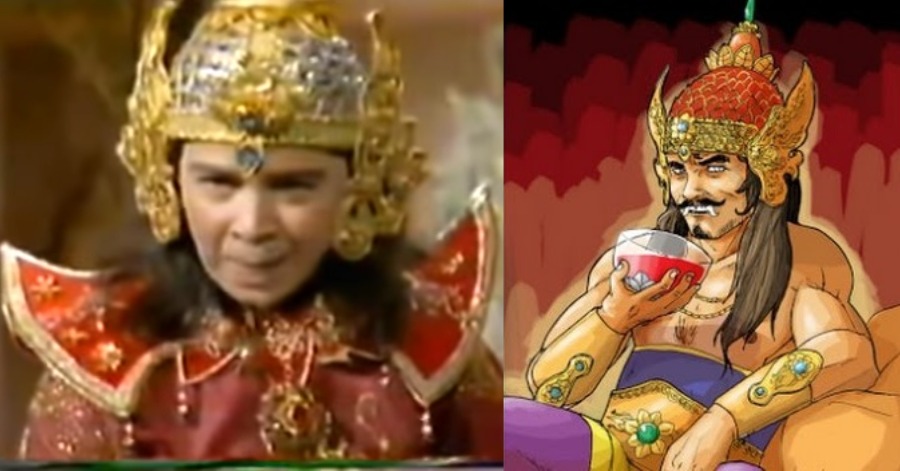 Raja Bersiong is the title name for a particular King of Kedah, which is centered in the Valley of Bujang. The country of Kedah at this time was part of the Srivijaya Kingdom. The king’s real name is King Ong Maha Perita Deria. His Majesty is the fourth king of the descendants of Merong Mahawangsa.

He originally behaved like an ordinary human. However, he then started getting addicted to human blood in his meal, causing his mouth to overgrow two sharp ones like the fangs of a Pontianak. He is a tyrannical king who is feared by the people. Anyone who violates the laws of the land will be arrested and imprisoned or killed by the guard or commander of Raja Bersiong.

During his reign, he really likes to eat curry dishes. It is most popular when the curry is spicy and has a lot of spices. The king’s favorite curry dish is spinach vegetable curry. He also likes hunting, especially deer hunting. In the Bujang Valley area, there are various types of deer and wild deer. Therefore, every time he hunts, the king will triumphantly kill several large deer. When he returned to the palace, the king would order the cook to mix the venison into the king’s favorite curry dishes to add more deliciousness. This particular cook who always cooks the curry likes to dream, without realizing he has cut off his own finger. The blood from his finger was included in the pot of spinach curry which was to be served to Raja Bersiong.

This cook has hidden the mistake from the knowledge of others because there is no time to replace this dish with another dish. When he came home from hunting, Raja Bersiong felt very hungry and kept on eating the spinach curried rice mixed with blood. He feels the abnormality in the spinach curry dish this time. The food tastes very good. Raja Bersiong has asked the cook about this. The cook had confessed his mistake in letting the king eat food that had been mixed with human blood. The king then ordered the guards to behead and kill the king’s enemies who were imprisoned. A prisoner will be beheaded and his blood will be collected in one container and put into the spinach curry dish for Raja Bersiong‘s meal. From that day on, the Raja Bersiong could not live without eating human blood every day. Every single one of the prisoners in prison was beheaded and their blood was drawn.

When Raja Bersiong came home from hunting, he was surprised to see the crowd of soldiers who had surrounded him, chaired by the Minister. His Majesty directed his guards to fight with the rebellious army which was chaired by the Minister, but the guards had fallen away and accompanied the minister’s army. The king was afraid because he lived alone and then fled into the forest. He then was rumored to be dead in the forest.