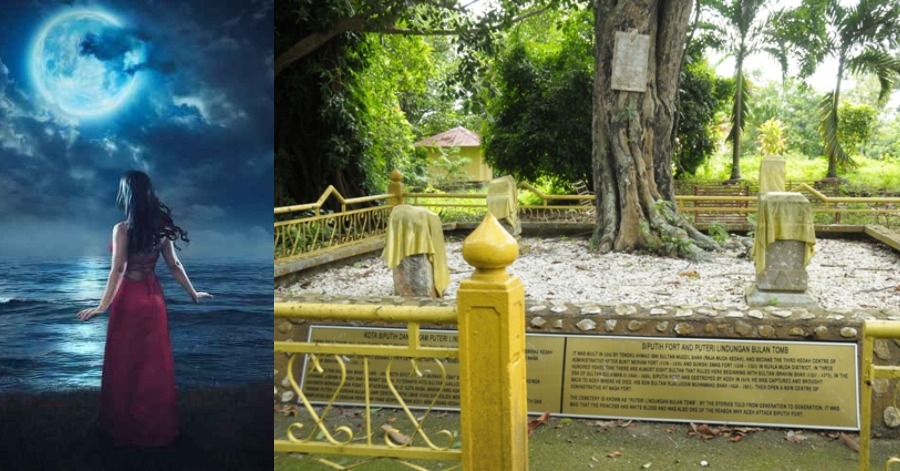 In Malay society throughout the time, Mahsuri’s story is definitely not something strange for many people. The story of this particular white-blooded woman has often been told since ancient times up until now. However, maybe people do not know that there is actually another legend of women who are also said to have white blood. The woman known as ‘Puteri Lindungan Bulan’. This legend of the daughter of royal descent has its own unique story.

The story of this legendary princess comes from an oral story that developed around the city of Siputeh and was passed down from generation to generation. It is actually about Sultan Sulaiman Syah who had ruled Kedah in the middle of the 16th period and the center of the king’s government was centered in the City of Seputeh. His Majesty is said to have a beautiful daughter who is said to have white blood, Puteri Zaleha. Apart from the white-blooded daughter, the king also has another daughter who is Puteri Zaleha’s grandfather, namely Puteri Mariam.

This case made Puteri Zaleha be so different from Puteri Mariam. Her white blood made her look unique and her name was always mentioned. The two daughters of Sultan Sulaiman Syah were beautiful in appearance. They also have a polite and gentle demeanor. Even so, Puteri Zaleha’s beauty was said to be more charming than Puteri Mariam. At the same time, Sultan Sulaiman Syah’s affection was poured out even more to Puteri Zaleha. In fact, the relationship between the two of them is so close that they cannot be far apart anymore.

Sultan Iskandar Muda Mahkota Alam who is the Acheh Sultan has dreamed of two beautiful girls who came out of a large grove. Too concerned about the beauty of the two girls, the king has referred to the astrology of the kings. According to this necromancer, they were the daughters of Sultan Sulaiman Syah who ruled Kedah. The astrologer also said that one of them was the White Blooded Princess. Listening to this matter, the king was increasingly interested in having a White-Blooded Princess, only the king could not identify which one of the daughters was.

A large wedding group was sent to Kedah. Sultan Sulaiman was worried about the safety of Puteri Zaleha. In addition, the king knew about the behavior of the Acheh Sultan who always exchanged wives. Encouraged by this feeling, the king exchanged Puteri Zaleha with Puteri Mariam, without being noticed by the marriage group. After the wedding customs took place, Puteri Mariam was brought back to Acheh. One incident occurred, where it was said that Princess Mariam was injured by the betel nut, and bled red blood, resulting in the secret that had been kept being exposed. Realizing that the king was deceived, Sultan Iskandar Muda ordered Kedah to be attacked.

Kedah was unable to oppose the gallant army of Acheh. Realizing the intent of the attack, Sultan Sulaiman ordered a stronghold to be built under the palace, where the king had hidden Puteri Zaleha. Kedah was defeated and Sultan Sulaiman and the other dignitaries were taken prisoner and taken to Acheh. However, before the king was brought to Acheh, the king had prayed that his daughter would be protected from the greed of the Acheh sultan. It is said that when the Acheh army destroyed the palace and city in search of this princess, even though the moon was floating brightly, the entrance to the fortress had turned dark causing the Acheh army to fail to get Puteri Zaleha. After being held captive for so long, Sultan Sulaiman died in captivity. During that period Puteri Zaleha, who had been left in the camp for so long also died. The king’s bodies were both buried at the top of the hill in the City of Seputeh which can be seen until now and the incident of the moon protection over Princess Zaleha’s grave still occurs to this day.