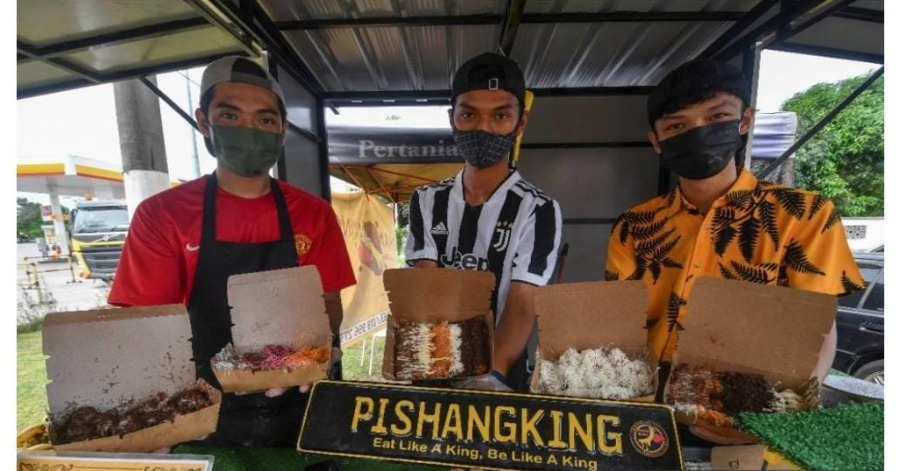 That is how best to describe three friends who are also Universiti Teknologi MARA (UiTM) students when they decided to band together and come out with a business plan to sell 15 variations of  banana-flavoured fritters.

Speaking on behalf of his friends, Shaidil Haq said the idea to sell banana fritters came when he decided to earn some pocket money to help pay his tuition fees at UiTM.

As he was reluctant to take any kind of loan to pay for his tuition fees, , Shaidil Haq began ‘experimenting’ in the middle of last year to come up with a menu product that has high potential and able to entice the people.

“I started off with the aid of videos to find out what types of food are popular and will not become outdated among the public in Kelantan.

“Through those experiments I became inspired and decided to invite two of my buddies Nik Muhammad who is an Interior Design student at UiTM Puncak Alam,Selangor and Muhammad Haiqal who is pursuing a degree in Business Studies at  UiTM Jasin, Melaka to help me run the business,” he said when met at his Pishang King stall along Jalan Pengkalan Nangka, Pengkalan Chepas near here.

According to  Shaidil Haq, a first year mechanical engineering student at UiTM Shah Alam, initially he confided in his mother Noor Zuraini Zulkifli, 48 and his father Ahamad Pakhrurazi Muhammad, 58, the recipe to make banana fritters.

After several attempts with the dough mixtures and making references with other recipes, Shaidil Haq and his two partners were finally satisfied with their banana fritter mixture.

“For a start, the three of us decided to introduce our creation to friends and families for their response and thankfully we received encouraging feedback and this made us decide to sell our flavoured banana fritters to the public.

“In August last year we started out by operating from a rented stall at Dataran Mara in Kota Bharu. But the business failed after just five months due to several constraints.

“However, we did not give up and continued the business but only on cash on delivery (COD) basis. Subsequently, we decided to give it another try and opened a stall here, in Pengkalan Chepa last February,” he said.

Shaidil Haq, the third of five siblings admitted that it was not easy managing time between studies and business, but this should not be an excuse adding that to continue the venture, there must be better time management.

On the business, Shaidil Haq said every day they would order about 50 kilogrammes of bananas, especially pisang berangan, which are sourced from suppliers in the nearby areas.

“Flavour-wise, we have chocolate, strawberry, white chocolate, tiramisu, green tea, caramel, butterscotch and also nuttella which is the most popular flavour.

“We sell the fritters in boxes priced from RM5 each and at times RM20 a box, depending on the topping and the number of fritters which is between eight and 16 pieces.

“Thankfully, the idea to sell banana fritters with toppings is bringing in the money and we are able to earn about RM1,500 a day,” he said adding that business hours is from 2.30pm to 7pm daily except Fridays.

Shaidil Haq said the three of them have been friends since 14 years ago and they plan to come out with several other flavours, aside from opening up more stalls in other districts.