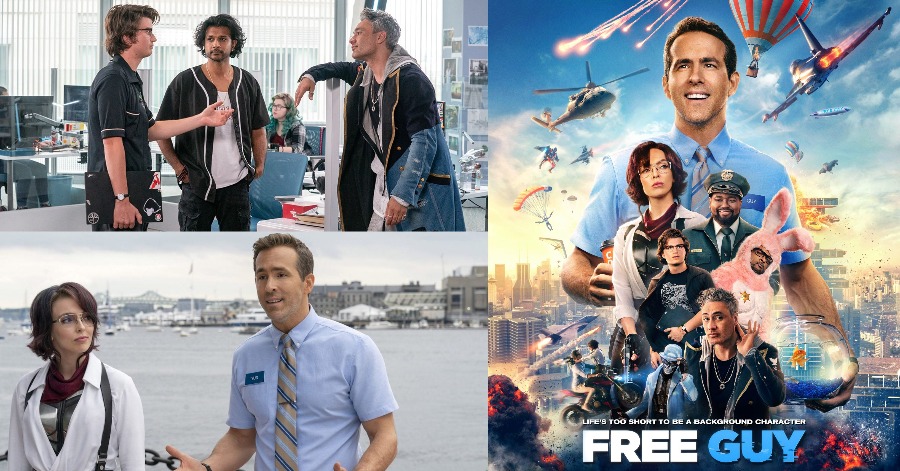 Free Guy is actually a 2021 American science fiction action comedy movie directed by Shawn Levy from a screenplay by Matt Lieberman and Zak Penn and a story by Lieberman. The film stars Ryan Reynolds as a bank teller who discovers that he is actually a non-player character in an open-world video game and becomes the hero of the story, trying to save his friends from deletion by the game’s creator. Taika Waititi, Jodie Comer, Joe Keery, Lil Rel Howery, and Utkarsh Ambudkar also star in the movie.

The movie has grossed $241 million worldwide making it the 7th highest-grossing movie of 2021 and received generally positive reviews from critics, who praised the clever concept and compared it favorably to a combination of action video games and science fiction films such as Ready Player One, The Truman Show, The Matrix, Grand Theft Auto, Cyberpunk 2077 and Fortnite.

What ‘Free Guy’ Is About

When a bank teller discovers he’s actually a background player in an open-world video game, he decides to become the hero of his own story. One that he can rewrite himself. In a world where there are no limits, he’s determined to save the day his way before it’s too late, and maybe find a little romance with the coder who conceived him.

What Can Be Said About ‘Free Guy’

All the characters are fully fleshed out they are not just disposable action characters you see in far too many video game movies. The acting is amazing, Ryan Renolds really made this movie. This movie wouldn’t have been as funny or emotionally investing without him. He also really fits the build aesthetic-wise. Which made the movie more real. And surprisingly Joe Keery gave the best performance in the entire movie.

Update MySejahtera Application Now, You Can See The History Of The Premises You Check In