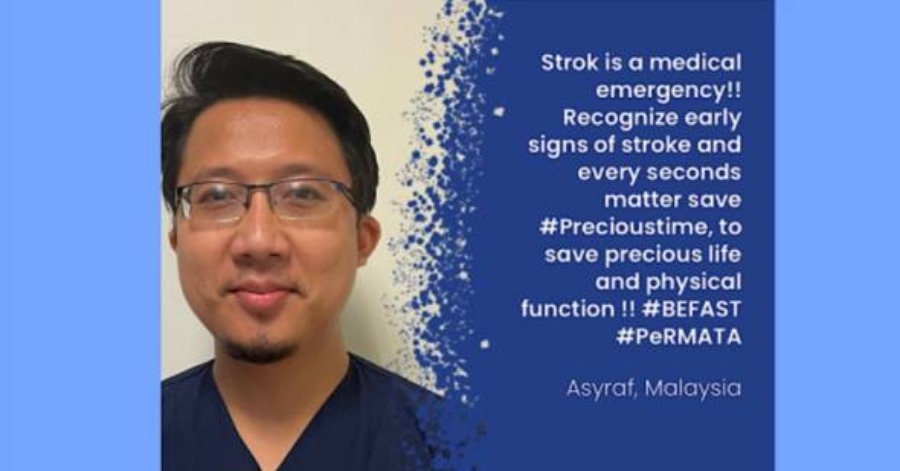 KUALA LUMPUR, Oct 27  — The Malaysia Stroke Council has launched a campaign, aimed at raising awareness of stroke warning signs, in conjunction with World Stroke Day 2021, which is observed on Oct 29 every year.

Dubbed, “Save Precious Time”, the campaign is held in collaboration with the World Stroke Organisation and local stroke support organisation, the National Stroke Association of Malaysia.

“We will celebrate the 15th World Stroke Day this Thursday. Stroke is still the second leading cause of death and a major cause of disability worldwide.

“The Department of Statistic Malaysia (DOSM) data shows that stroke is the third leading cause of death in Malaysia after heart attack and lung infection,” he told Bernama, here, today.

Dr Wan Asyraf said as we communicated on World Stroke Day last year, one in four people would suffer a stroke at some point in their lives and therefore, it was critical to respond to stroke as quickly as possible.

He noted that, the main concern arises as the majority of the public are unable to recognise the early signs of stroke and this is very common in Malaysia.

“We hope to achieve the maximum number of participation this year from people around the world including Malaysia to fight against stroke, which has been declared as a public health emergency since 2010,”  said Dr Wan Asyraf who is also a neurologist at Hospital Canselor Tuanku Muhriz (HCTM), Universiti Kebangsaan Malaysia (UKM).

According to Dr. Wan Asyraf who is also the 1st cohort of the World Stroke Organisation Future Leader programme (WSO FLP), the “Save Precious Time” campaign will be running for 2 years until 2022.

He said when a person has a stroke, every second that goes by is crucial as the brain tissue and millions of nerve cells begin to fade away.

“We want to communicate what can be saved, namely a life, independence, quality of life and precious memories,” he explained.

Meanwhile, Dr. Wan Asyraf said the Malaysia Stroke Council committee has worked with the National Stroke Association of Malaysia (NASAM) and ANGELS Initiative Malaysia to develop a stroke awareness kit known as PeRMATA or BE FAST.

“PeRMATA was developed by our team in UKM and we hope that through the use of the acronym the public will be able to remember the early stroke signs and seek immediate treatment at hospitals.

“We also hope that we can have our own stroke education booklet to assist the public in preventing a stroke,” he added.