Dance is the rhythmic movement of the body in a certain location, usually to music, for the aim of expressing a concept or emotion, releasing energy, or simply enjoying the movement itself. Dance floors are often sweaty environments for a reason. All those shimmies and shakes burn a tonne of energy and provide a slew of other surprising health benefits as well.

As much as it is healthy and a fun activity, would you believe if you were told it can also be a contagious disease?

The Strasbourg dance plague may sound like something out of a fairy tale, but it’s thoroughly documented in historical records from the 16th century. It’s also not the first time something like this has happened. Similar manias erupted in Switzerland, Germany, and Holland, but none were as large—or as deadly—as the one that erupted in 1518.

Residents of Strasbourg (then part of the Holy Roman Empire) were hit by an unexpected and seemingly overwhelming urge to dance in July 1518. The pandemonium began when Frau Troffea stepped into the street and began silently twisting, twirling, and shaking. She continued her solitary dance marathon for about a week, and at the end of it, around a third of the Strasbourgeois had joined in.

Soon after, up to 400 people had died as a result of the dance epidemic. With no alternative explanation, local medics blamed the phenomena on “hot blood,” suggesting that the sick merely gyrate their way out of the fever. Professional dancers were hired in and a stage was built. The community even hired a band to offer background music, but the marathon quickly began to take its toll. Many dancers passed out from weariness. Some even died of heart attacks and strokes. The bizarre affair didn’t come to a close until September when the dancers were taken away to a mountainous sanctuary to plead for forgiveness.

What could have led these people to dance till death? 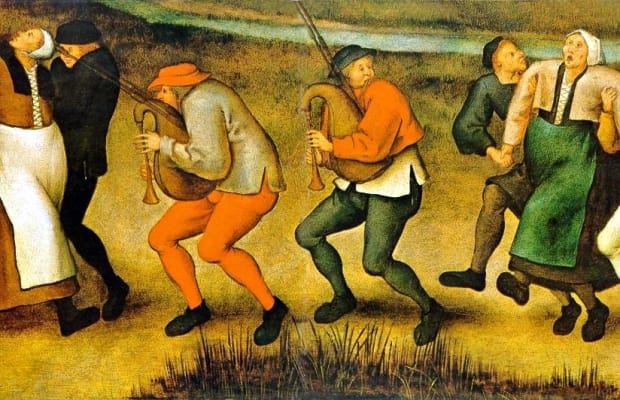 Experts are still unsure what prompted the frenzy, which may have exhausted many who danced. Some blamed religious beliefs and demonic possession while others said there was the existence of a dancing cult. Most people, however, believed that the dancing mania was a curse brought by Saint John the Baptist or in other places, Saint Vitus. In parts of Italy, the dancing mania was known as tarantism, which was believed to be brought by either a spider bite or a dangerous poison. Ergot, a type of fungus that may develop on rye, is another likely cause. Under certain circumstances, ergot can generate a substance that is remarkably similar to LSD. Some historians believe that this hallucinogenic fungus is to blame for choreomania.

As medical technology progressed, a syndrome related to this dancing madness was dubbed sydenham Chorea. This illness was formerly thought to afflict primarily youngsters, causing uncontrollable tremors in the arms, legs, and face.

Back in 1888, a German man named Justus Friedrich Karl Hecker described the dancing madness, which was called ‘The Black Mania and the Dancing Mania’ as below:

‘They formed circles hand in hand, and appearing to have lost all control over their senses, continued dancing, regardless of the bystanders, for hours together, in wild delirium, until at length they fell to the ground in a state of exhaustion. They then complained of extreme oppression, and groaned as if in the agonies of death, until they were swathed in cloths bound tightly round their waists, upon which they again recovered, and remained free from complaint until the next attack.’

Unfortunately, till today, the cause of this plague remains a mystery, but it will always be a fascinating aspect of European history.