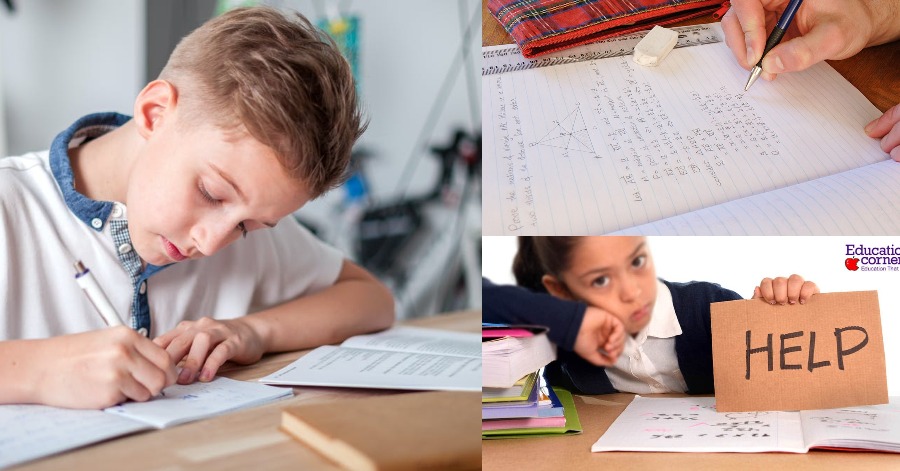 Homeworks are probably the last thing you want to deal with as a student. And for some of us, we rather do them than our boring work routine.

Those of us who have had formal education may recall the aggravation of receiving homework from the majority of our teachers. Your teacher directs your class to answer a certain page of your book or write an essay about the topic you just discussed before class ends.

But have you wondered, how homework became a thing? It’s a man named Roberto Nevilis, according to Google and other websites. The concept of homework was straightforward. When students exited the classroom, Nevilis felt that his lessons had lost their meaning. He decided to adopt other tactics after being disappointed that kids did not excel themselves despite his efforts. As a result, homework was created. He established homework as a kind of punishment for underperforming students, and that as a result, billions of children remain frustrated at school and at home almost a thousand years later. However, some people think it is just a myth, and even better, some say Roberto doesn’t exist!

So who really invented homework?

Many sites on the internet say that Roberto Nevilis was the first instructor to introduce homework to students. However, when you look at the websites that assert this, you’ll notice that they’re largely forums or obscure educational blogs. Roberto Nevilis is not even mentioned on any credible website or news source. Alternatively, some of the less trustworthy publications would confirm his participation without using the phrase “allegedly” or something imprecise like “scientists believes” or something like.

When he developed homework, Nevilis was said to be a teacher in Venice, Italy. Some say he invented it around 1095, while others say it wasn’t until 1905 that it swept throughout Europe and the rest of the world. It was allegedly used as a means of retaliation against students who underperformed in class. Students who did well in class were exempt from having to do homework.

When he developed homework, Nevilis was said to be a teacher in Venice, Italy. Some say he invented it around 1095, while others say it wasn’t until 1905 that it swept throughout Europe and the rest of the world. It was allegedly used as a means of retaliation against students who underperformed in class. Students who did well in class were exempt from having to do homework.

So, we are not really clear about who might have invented the homework. But, We can trace back to who was in charge of making homework the way it is now: Johann Gottlieb Fichte was a German philosopher who is credited with establishing German nationalism.

Prussia had a hard time inciting nationalism among its citizens in 1814. Citizens might opt to return to whatever they were doing instead of serving the country after the war, rather than giving their time and sacrifice to the country. There was no sense of patriotism or pride.

As a result, Fichte devised the Volkschule — a compulsory nine-year education akin to state-provided basic and lower secondary education – and the Realschule – a secondary school open only to aristocrats. The Volkschule students were assigned homework as a tactic to demonstrate the state’s dominance even during their free time.

The system spread throughout Europe, although not to the point of ultimate dominance. Some countries have maintained their unique systems, which is why Finland does not assign homework to its pupils. However, in 1843, when the United States still used private tutors or informal courses, Horace Mann changed public education after visiting Prussia and learning about their educational system, which he then integrated into the American system. As a result, homework became a worldwide practice.

While this may be a debatable issue of who really invented homework, let’s face the fact that homework really gave all of us a miserable point in life! 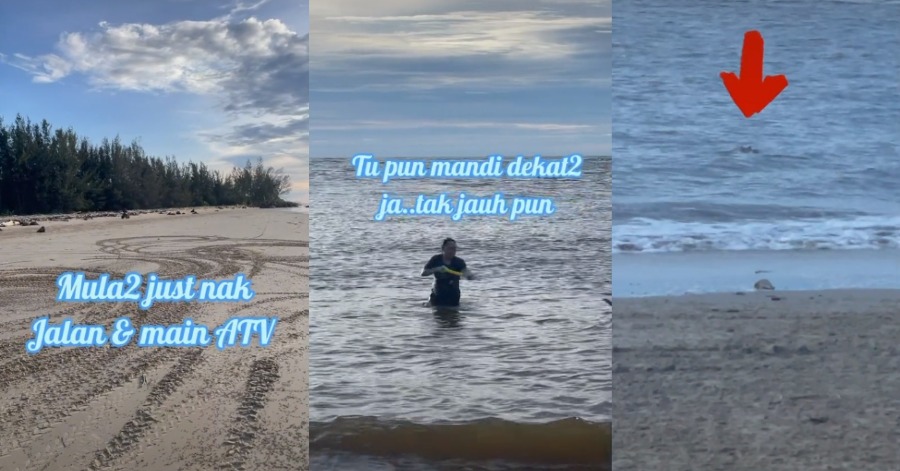 Kuala Sibuti Beach is actually a particular destination about an hour’s drive from Miri and it is a getaway spot for city dwellers who wish to commune with nature. Bekenu town with its seafood market is just 15 minutes drive away. In addition, Kuala Sibuti Beach is a really welcoming beach in Niah. Known as a favorite spot for locals and tourists.

For many people in Malaysia, a beach would be one of the definite destinations for them to spend some time doing leisure activities with their beloved family members and also friends. While having fun there at the beach, people need to always be careful with the dangers that might come towards them. For example, wild animals. That is what happened to a family which got to record a sighting of danger at Kuala Sibuti Beach. That is actually so dangerous.

According to posted video that went viral on TikTok by a TikToker that goes by the name LadyDianneR, she stated that they initially planned that they just wanted to walk around the beach and also ride ATV. After a while, her children requested to swim on the beach because it has been a while since the last day that they swim there.

Surprisingly, she noticed something floating near the area where the family members are swimming. That thing was actually a sighting of a crocodile. They are scared of what they saw. The TikToker advised other people to be careful. 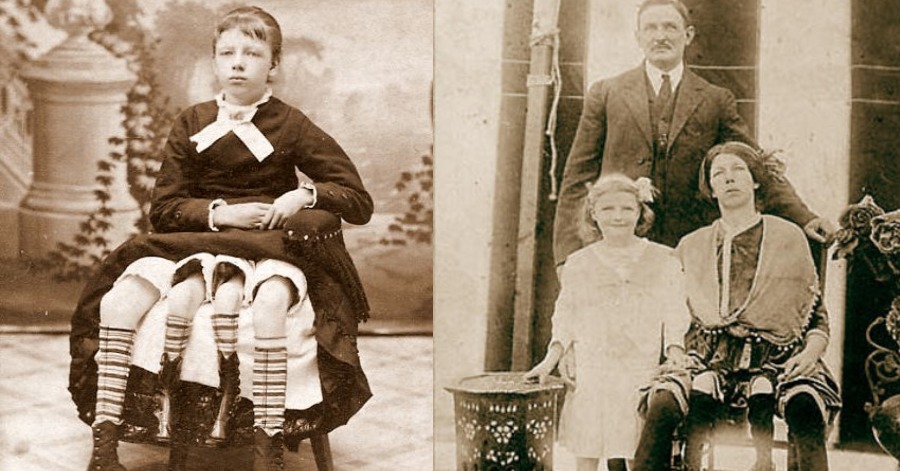 Mother nature’s mysteries are tough to comprehend. It bestows blessings and punishments based on its own whims and inclinations, and humans have no voice in the matter.

It is neither fair nor just when one individual is born into a wealthy family with perfect genetic makeup, while another is born into a poor family with many hereditary disorders. But that is life, and there is nothing anyone can do about it. Here’s a rather odd story you might have not heard of.

Josephine Myrtle Corbin was born in the year 1868 in Lincoln County, Tennessee. Except for one issue, she appeared to be a regular child. Josephine was born with two pelvises, one on each side of her body. She has four legs as a result of this. She couldn’t walk on the two inner legs since they were smaller and weaker.

Her condition was dubbed “posterior dichotomy” by some, while she was dubbed “dipygus dibrachius tetrapus” by others. A doctor went on to describe her as a “female, belonging to the monocephalic, ileadelphic class of monsters by fusion,” using the word “monster.” Despite her abnormalities, Myrtle Corbin was well-known for her natural beauty and good health. Lewis Whaley depicts her as a five-foot-tall girl with light skin, curly hair, and blue eyes in the 1889 British Medical Journal.

The world became her runway when she was thirteen years old. When she worked with P.T. Barnum, Ringling Bros., and Coney Island, her popularity skyrocketed. She was dubbed “The Four-Legged Woman,” and she was described as “as gentle as summer sunshine and as cheerful as the day is long.”

Corbin used to appear strange, often clothing the extra limbs in socks and hers in shoes. Her rising fame earned her a hefty deal of $450 per week at the time.

She married James Clinton Bicknell at the age of 19, who insisted on her leaving the sideshow to start a new life in farming – a sincere love that proved he wasn’t into her for the money. a year after her marriage, and she began to grow severely ill as a result. She got fevers all the time and couldn’t stop vomiting.

Unfortunately, the pregnancy caused her a lot of pain, so she had an abortion in the fourth month. But she quickly healed and gave birth to eight children, just four of them lived. Medical books state that she gave birth from both sides of her womb, according to medical texts. Nancy Estelle, Francis Clinton, Ruby, and Lillian J. were the names of four surviving children according to the 1910 census.

Her family had to enclose her casket in a concrete box to protect her from grave robbers when she died on May 6th, 1928. Collectors and experts even offered her family a large sum of money for her remains. They turned down the money because they believed Josephine should be allowed to die in peace like any other person.

Josephine Myrtle Corbin’s tale is inspiring because she never let her circumstances control her life. Myrtle soared ambitiously high and lived every happiness with pride, despite the deformity obstructing her life view. Despite being labeled a freak and a monster by many, she was an intellectual woman who lived her best life. She is a source of inspiration for everyone. Her story serves as a reminder that with the right attitude, anyone can overcome any flaw. 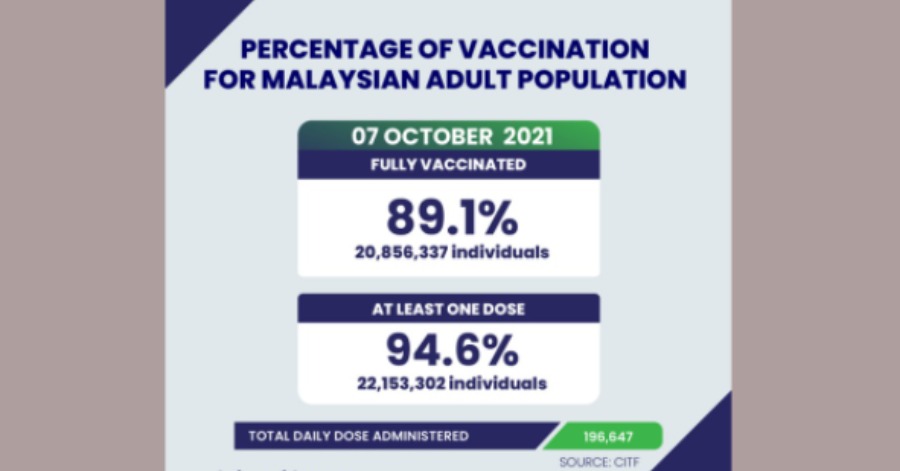 KUALA LUMPUR, Oct 8  — A total of  20,856,337 individuals or 89.1 per cent of the adult population in the country have completed their COVID-19 vaccination as of yesterday, just 0.9 percentage points short of the targeted 90 per cent.

Based on the Ministry of Health data on the COVIDNOW portal, 94.6 per cent or 22,153,302  individuals of the adult population have received at least one dose of the vaccine.

On Sept 22, Prime Minister Datuk Seri Ismail Sabri Yaakob said interstate travel would resume when 90 per cent of the adult population in Malaysia have been fully vaccinated.