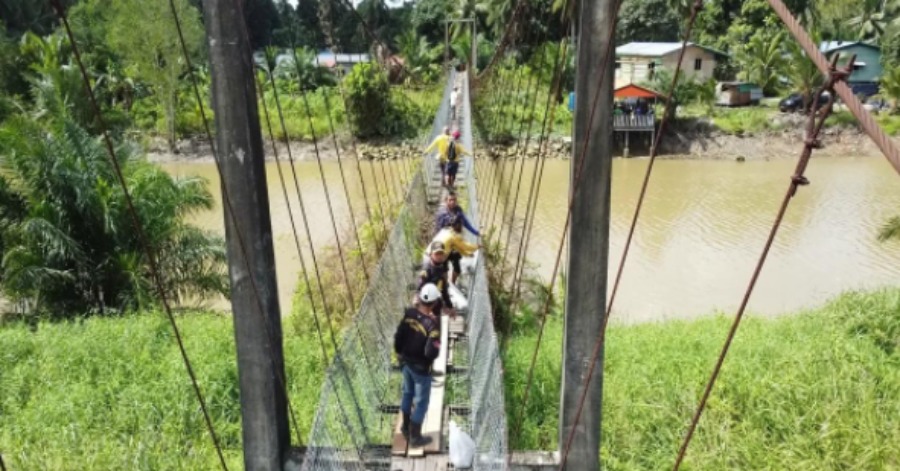 SANDAKAN, Jan 12 — The dilapidated suspension bridge in Kampung Nelayan Tengah, near here, has been closed temporarily beginning today over for safety concerns.

In a statement today, the Development and Security Committee (JPKK) of the village informed that the decision was made on the instructions of the Public Works Department (PWD)  and Sandakan Municipal Council (MPS) which decided that the 30-year-old bridge was not safe to be used as a pedestrian walkway.

“Therefore, JPKK members at Kampung Pampang and Kampung Nelayan Tengah need to inform their respective villagers on the closure of the suspension bridge,” the statement read.

Yesterday, the villagers held a gotong-royong to repair the bridge by replacing the wooden planks, funded by the Libaran UMNO division, as a stop-gap safety measure on the 150-metre long bridge.

Sungai Manila Community Development chief Isgau Abdullah said the engineers from the Implementation Coordination Unit (ICU) and MPS are scheduled to make a reassessment of the bridge on Thursday to determine whether it could be repaired at a cost of RM100,000 or needed to be rebuilt with a stronger structure.

On Monday, a Bernama photograph of students crossing the dilapidated bridge went viral, generating an outpouring of sympathy and concern for those who exposed themselves to danger when using the bridge.