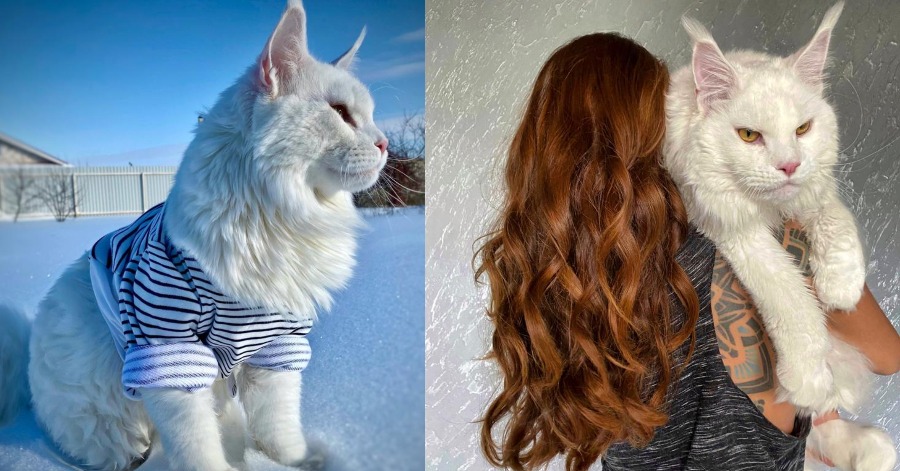 For those who might not know, the Maine Coon breed is actually a large domesticated cat breed that ever exists. This is because it has a very distinctive physical appearance and also valuable hunting skills. It is one of the oldest natural breeds located in North America. In the U.S. state of Maine, it got originated and it is where it is the official state cat.

Recently, one cat from this particular breed has taken the attention of so many people in this whole wide world for being the world’s biggest Maine Coon kitten at the age of only two years old. The kitten named Kefir weighs in at a weight of 12.5kg and it is said that it would continue to get bigger until the kitten is roughly three or four years of age.

The proud owner of the largest Maine Coon kitten that always got mistaken as a dog would be none other than a woman named Yulia Minina. She lives in the Stary Oskol in eastern Russia which is totally cold. According to a statement, she had just bought the huge Maine Coon kitten two years ago, and a lot of people were surprised by it.

Yulia Minina also stated in an interview with The Mirror, “I could not even think that an ordinary baby can become so big. He not only grew up big in appearance, he is also very smart and always behaves calmly”. That is actually true because the Maine Coon breed is usually good-natured and also gentle. They could be seen to be thriving in families with children and other pets such as dogs and others. The most surprising trait is, they are known to be very tolerant.

A kitten, after contracting the virus from its owners and has become the first animal to be infected by Covid-19 in South Korea. The...